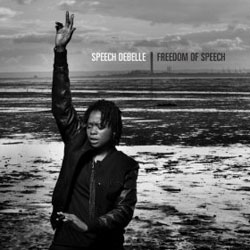 That old cliché of the ‘difficult second album’ could apply to Speech Debelle more than most. When her debut album Speech Therapy was released, it was widely acclaimed as a quietly impressive, articulate debut that promised great things. Then, Speech Therapy won the Mercury Music Prize. And it all started going a bit wrong.

Although nobody ever claimed that Speech Therapy was a particularly commercial album, there seemed to be widespread derision when it turned out to be the lowest selling Mercury winner ever. A spat between Debelle and her label Big Dada didn’t help matters, and for the next couple of years she disappeared, leaving us to ponder whether there was indeed a ‘curse of the Mercury Prize’ or not.

It was the London riots last summer that prompted her reappearance with a timely issue of the track Blaze Up The Fire. It’s featured here, and while some may disagree with the political stance of the lyrics (expressing sympathy and empathy with those rioting and looting), it’s impossible to deny that the fire in her soul is still very much visible.

Backed by Roots Manuva and Realism, Blaze Up The Fire is the standout track on Freedom Of Speech, and a good example of the harder edge she’s introduced into her sound. While on Speech Therapy there was a predisposition to jazz-funk, there’s a greater variety of styles on display here – raw, gritty and, especially in the case of opening track Studio Back Pack Rap, impossibly thrilling.

What hasn’t changed is the quality of her lyrics. She sometimes comes across a bit heavy handed, yet she’s equally adept at both politics and the personal. Although Collapse falls over itself slightly in trying to explain oil’s role in the geo-political meltdown, the aforementioned Blaze Up A Fire is incisive and refreshing in its quest to seek answers rather than to outright condemn: “They’re telling me they went to Iraq to help them grow…Their truth pours from the ground in Fallujah”. The reunion with Roots Manuva works well, proving once again after his appearance on her first album that the pair share a rare musical chemistry.

She’s as poignant as ever too on the subject of relationships – although there’s nothing to match the emotional wallop of Go Then Bye from her debut, Angel Wings is gorgeously wistful and sad, while Elephant And Shawshank sees Speech turn her unforgiving eye on herself: “I gave up sure for unsure…never do that”. Only X Marks The Spot doesn’t really work, with its uncharacteristically clumsy couplet of “you’re not over your ex, that’s why you’re my ex”.

Also, for all the raw, exciting hard edge on display, there’s also room for one big pop moment, the Eg White co-penned I’m With It which is a massive, feel-good pop-soul anthem with a chorus that Adele could be proud of. It’s the one track on here that could be a massive mainstream radio hit.

It’s surprises like that which makes Freedom Of Speech such a satisfying album – such as the Kanye West steal of “you know this shit is fuckin’ ridiculous” in Live For The Message, right through to the rapid-fire raps over a mournful violin on the superb closing track Sun Dog. A large amount of credit should also be given to producer Kwes, whose innovative sound here stands comparison with the work of Matthew Herbert.

It may not grab the attention like her debut did, but given what happened before, that’s probably for the best. Her debut promised much; Freedom Of Speech sees Speech Debelle delivering on that promise.