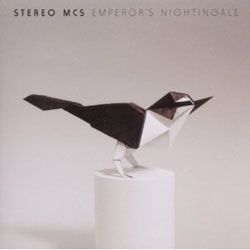 Anybody attending the Stereo MCs contribution to last year’s Meltdown Festival at the Royal Festival Hall will have been left in no doubt at the band’s passion and ongoing commitment to the cause. While their last album Double Bubble, already three years hence, was not perhaps a classic in their oeuvre it contained enough sparks of inspiration to suggest Rob Birch and Nick Hallam still had plenty to say, and it had enough of an edge to make people listen.

Emperor’s Nightingale goes a step further creatively and pulls a few surprises out of the bag, coming as it does in the face of the band’s unexpected yet logical signing for !K7. Unfortunately not all of the surprises are as successful as hoped. Birch and Hallam have in many ways gone back to basics in their approach for this one, building on their work on Double Bubble and its predecessor, the emotive Paradise, building the new work’s importance. Where sampled loops once reigned we now have free flowing jams, and where Birch was more inclined to rap he now sings. The production sounds cleaner, the urban grittiness kept at arm’s length for much of the duration, though of course the husk still present in Birch’s voice reminds us of his close proximity to the streets of London.

And yet, something vital is missing. When he sings the opening line on Boy – “when I was a boy, I didn’t understand, why encouragement was kind of hard to come by, to make a dream come true” – its relevance to him is undoubted, yet the emotion is not made fully clear. Manner is about “changing moods and changing passions”, yet the album feels in one mood throughout, and worse is to come on Tales, which attempts to wrest a piano riff from the British house music glory days and update it. “Would I ever leave home?” ponders the vocalist. Not if this is anything to go by – and by the time the beats become more adventurous and vital at the end of the song the damage is already done. If one moment sums up the missing inspiration on the album, too, it’s the couplet “speed of light – feels alright” on 2 Can Do. Only alright?

Birch and Hallam appear to be going their own way here, with no discernable sign of Cath Coffey or Rachel Birch in the mix – which is a shame, as they have brought much to the Stereos’ sound over the years – and they are missed in the resultant sound, which is a little one dimensional. For sure the band still knows how to make people dance, but the rhythms are too processed, the rough edges smoothed off and the production too clean.

A rabbit emerges from the hat in the shape of guest Jamie Cullum, who lends his piano to Sunny Day and Boy. The former strikes a softly emotive chord, while though the latter provides some emotion through its autobiographical tales, the lyrics – “now that I’m a man, the tools are in the van” are ham fisted.

It is by no means time to write off the Stereo MCs – especially as four of the five albums in their 19 years have been relatively recent – but it is to be hoped that they will continue to make relevant urban commentaries as they have done prior to this brave but largely disappointing record.