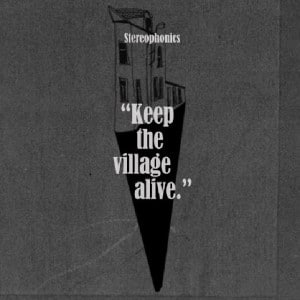 Local Boy In The Photograph, Just Looking, Maybe Tomorrow, Dakota: a list of Stereophonics’ singles over the years since their 1997 breakthrough is impressive, if a bit ‘always the bridesmaid, never the bride’ in terms of real A-list tunes. A singles band in the main, then, and even the most ardent followers of the Welsh quartet would begrudgingly agree that most of their albums since Word Gets Around (1997) and Performance And Cocktails (1999) have been rather patchy.

Sales would suggest otherwise however, the band having enjoyed five UK album chart toppers to date with the lacklustre Pull The Pin the last of the five, undoubtedly one that’s guilty of living off the band’s former glory. 2013’s Graffiti On The Train is their most recent effort, an album penned after a prolific creative spell during 2011 and 2012 when they took a two-year break from touring and ‘went to work’ every day in the studio. Album nine Keep The Village Alive is largely reliant on material written at the same time, but with batches of songs collated together in a best-fit fashion for both albums, this new collection is certainly no second class selection of songs compared to those that hitched a ride on Graffiti On The Train.

The energy of the band has always been missing somewhat since the exciting days of Word Gets Around, but album opener and first single C’est La Vie manages to recapture some of this lost vibrancy. Kelly Jones remains in possession of one of the best voices for soft rock, his slightly husky vocal tones finding themselves stretched more than usual for an up-tempo, fist-pumping adrenalin rush that is as close to punk as the band are ever going to get.

Second single I Wanna Get Lost With You was not a part of the 2011/2012 sessions, having been written during a recent Australian tour, and it’s another good song, a stereotypical cut that will probably delight fans despite its simple main riff being something that a beginner could probably master within an hour of picking up an electric guitar. White Lies is the most anthemic track on offer, this time being the sort of thing you might have expected to hear on Bryan Adams’ 1984 album Reckless.

However, in other places this safe consistency becomes a little too pale. Sing Little Sister shuffles along uneventfully, the slower string-laden Song For The Summer suffers from a lack of exciting melody despite sounding pleasant, Into The World is a sparser, if slightly more memorable effort but My Hero, a tribute to an uncle, is rather cringeworthy, the sort of track that should have been put out as a non-album single’s b-side, preferably around Christmas to make the most of the ever-present sleigh bells.

A constant chugging piano riff permeates throughout the vastly better Fight Or Flight, and Sunny benefits from the most exciting piece of guitar work you are likely to hear on a Stereophonics record, taking the stomp to a soaring climax. Album closer Mr And Mrs Smith completes the latest collection with possibly its finest moment, a rousing effort depicting illicit encounters in a hotel room. It’s nailed on as a future encore cut for upcoming live shows.

Stereophonics have become a little like AC/DC in that you know what an AC/DC album will sound like before you’ve even heard it. Safe, reliable, solid; all accurate adjectives you can associate with 99% of the band’s output, and Keep The Village Alive does little to rock the boat. For anyone wanting something new, exciting, raw, intoxicating… then this isn’t for you. If, however, you know what you like, don’t like taking risks, want an easy life when it comes to spending money on music and are already a fan then you’re going to be satisfied with an album that probably ranks dead centre amongst their full catalogue.