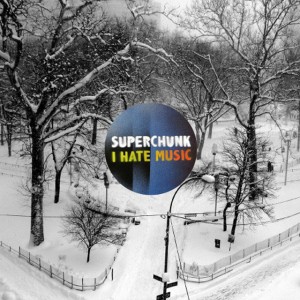 Merge Records founders and mainstays Superchunk returned in 2010 with the triumphant Majesty Shredding, an album that, more than anything else the band has released, exemplified the term “pop rock.” It also cemented the band as a force to be reckoned with once again. Now, Superchunk has released their tenth studio album, the ironically titled I Hate Music, in 2013.

Indeed, what’s ironic about the title is that the album itself, after just one listen, makes you feel the exact opposite emotion towards music that the title suggests, as Mac McCaughan and company have created an album that fits, like its predecessor, atop the most energetic and best of the band’s legendary catalogue. But at the same time, I Hate Music’s sombre subject matter, namely reflection on lost loved ones, gives their music a newfound depth and complexity.

From the ominous tones that open the album on Overflows, you realize that you’re not about to listen to an album filled with Digging For Somethings or Slack Motherfuckers. Instead, you’re about to take in an album filled with songs about getting over getting older; when McCaughan sings “Everything the dead don’t know/Piles up like magazines and overflows” on opener Overflow, ostensibly referencing his musical contemporaries whose presence no longer grace this earth, you realise he’s gotten over grand sentiments of nostalgia. He’s getting down to frank business, trying to rationalise his own existence.

Thus, on the second track, Superchunk address the album’s odd title. Me & You & Jackie Mittoo is a charging, hooky affair whose most notable lyric is “I hate music – what is it worth? / Can’t bring anyone back to this earth / Or fill in the space between all the notes / But I got nothing else so I guess here we go.” The track, only two minutes long, essentially serves as the thesis statement for I Hate Music and a personal statement about the lives of the members of Superchunk in general: they’ve quickly come to realise that music is all they have, rendering useless the five stages of grief model in two rhyming couplets. And by the time they transition into the third track, Void, Superchunk have begun to believe in music’s redeeming power. Combined with driving, power pop instrumentation only bettered by the one minute thrill of Staying Home (track four), McCaughan screaming “I don’t believe everything I see” comes across as healthy scepticism, and the title comes across as healthy existentialism, crisis finally turning into motivation.

And corresponding with the darker than usual subject matter for Superchunk comes slower, more reflective songs than usual, like Low F and especially the final track, What Can We Do, one about the band’s refusal to say goodbye. But this refusal is not denial or anger. Instead, it’s the band coming full circle, realizing that they can relive their friends’ legacies by continuing to make music. I Hate Music is dedicated to late filmmaker, musician, and collaborator David Doernberg, who died of cancer last year. And while some songs on I Hate Music, like Trees Of Barcelona, reflect on the band members’ actual experiences with Doernberg, Superchunk’s reflection on their late friend truly follows the old adage that the deepest, most personal truths are universal; anybody who has lost a loved one can identify with McCaughan and company when listening to I Hate Music.

Impressively, whenever Superchunk threaten to fall into one of the all-too-neat five stages of grief, they’re rescued by music, as on the relationship between the bargain-heavy Your Theme and the inspiring FOH. “The drums exploded and the amps are down / But Matthew’s got it wired and we’re coming around,” sings McCaughan on the latter. Falling down, getting up, and persevering through music is something Superchunk have done time and time again. On I Hate Music, they’ve bested even themselves.