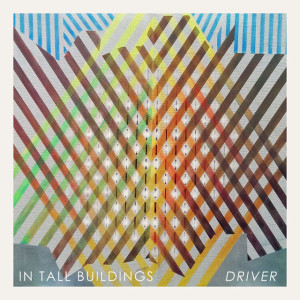 Sophomore: needless to say, you will have come across this word in relation to album reviews before because it’s almost as freely used as debut. Now, whilst everyone knows that debut refers to a first occurrence of anything, there’s probably a fair few that wonder what sophomore really means so let’s clear that up. It’s simply a fancy word for second, specifically second in a series; that’s it, nothing more, nothing less. So to call In Tall Buildings’ second album Driver a sophomore effort is a little premature, as it implies there will be others because who ever heard of a series of just two, so it’s probably better used in retrospect when dealing with album reviews.

An outlet for Chicago’s Erik Hall (not to be confused with once ultra-annoying, cigar puffing ‘in yer face’ football agent and EMI Records publicist, “monster” Eric Hall), In Tall Buildings’ eponymous (that’s self-titled to you and me) debut from 2010 garnered enough praise for Hall to have felt darn pleased with himself, his brand of ‘dream pop’ impressing some well renowned institutions.

Opening track Bawl Cry Wail is a curiosity: pedestrian acoustic strumming and a hi-hat led percussive beat that sounds like a basic, freely available backing track prevail throughout, giving the vocals much space to operate within but the odd distorted warp effect that punctuates at regular intervals is intriguing. Bubbly keyboards delight but that damn warp – as unique as it is – is a little too unnervingly like the after effects of an ear-bleeding gig by the likes of Queens Of The Stone Age, where ensuing conversations are impossible to digest due to severe ringing and warping within the ol’ lug ‘oles.

There are other moments on Driver where the seed for creation again feels a little insufficient. Aloft drones on and on, like repetitive ringing bells as if Hall is attempting to recreate bells with just a guitar and is little other than filler while I’ll Be Up Soon is built around a solitary guitar riff where again a wah-wah effect seems to have possibly been the catalyst for an entire song. Cedarspeak then wastes some more time with random, harp-like fingerwork whilst All You Pine struggles to break away from its simple bass foundation and military style drumming until a more satisfying, soaring chorus appears.

Things occasionally get significantly more interesting. Exiled is again minimalist, but a constant riff and deadpan beat entwine perfectly with Hall’s almost Nick Drake like vocal before the captivating guitaring elevates the track considerably. Unmistakable is another intoxicating effort, bouncing along at a medium pace before glittering keyboards and guitar work their magic. The similarly paced Flare Gun benefits from gorgeous bubbly instrumentation but like the majority of the best tracks, even after numerous plays there is little in the way of catchy hooks within the song to prompt any recall long after the album has ended.

And then just when you’re thinking it’s all OK but not spectacular, along comes Pouring Out, a game changer if ever there was one. This is the one; it’s so smooth, like a chilled out Kurt Vile track with fleeting but magnificent wah-wah guitar sitting beautifully amongst a sonic palette of perfection, or maybe even like a slowed down The War On Drugs cut – you could even get lost in this dream, in fact.

It’s a rather odd name, is In Tall Buildings. Rather than towering structures themselves, perhaps it gives the impression of a view from within, an outlook over everything, an all-seeing eye cast over the world. Up in the clouds, in fact, an idea that fits neatly into the dreamy feeling much of the music gives the listener. Driver, however, is not a collection of magnificent, cloud-penetrating skyscrapers, it’s an album of peaks and troughs and barring the phenomenal Shard-like magnificence of the sublime Pouring Out, it often struggles to leave the ground, let alone rise to even Post Office Tower heights. Indifferent, but an essential listen, even if just for the brilliant finale.

In Tall Buildings MP3s or CDs

In Tall Buildings on Spotify