The Tamborines – Sea Of Murmur 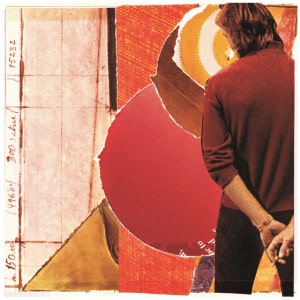 Sunday February 25, 2007. A beer-swilling shoegaze lover called Bill makes his way through a surprisingly meagre crowd with lopsided fag drooping from the corner of his mouth having just taken a leak upstairs at The Oakford Social Club in Reading. “I just had a piss right next to Mark Gardener,” he incredulously crows. “All his fuckin’ ‘airs gone,” he stutters in disbelief.

The free Sonic Cathedral promoted event not only had (at the time) the ex-lead singer of Oxford shoegaze pioneers Ride headlining with an acoustic set, but also ambient master and future Engineers keyboardist Ulrich Schnauss spinning notable shoegaze tracks during a DJ stint. Not surprising, then, that another act that night were seen as largely fleshing out the line-up; a blistering set of fuzz-heavy noise including some Ride numbers where Gardener memorably joined them on stage, however, proved that they were there on their own merit.

The Tamborines – a male/female duo originally from Brazil – liked their effects pedals that night and the fuzz firmly found its way on to debut album Camera And Tremor in 2010. The follow-up Sea Of Murmur pays little reference to the initial direction at all though, keeping things more simple by concentrating on pop melodies and straightforward jangly guitar lines rather than a fuzzy feedback-drenched onslaught, resultantly leaning towards Teenage Fanclub rather than shoegaze trailblazers Ride.

Perhaps the biggest nod to the past appears for Slowdown, one of a few reworked older tracks that appear here. Uptempo electric guitar chords are strummed alongside tambourine for a catchy number that sees brief, punchy injections of fuzz before a simple riff completes the reverb contributions. Black And Blue is another of the older cuts given a makeover and again, if fleetingly for its guitar interludes, hints at their early guise, as does the sugary pop of One Afternoon, for its instrumental breaks where scrawling guitars threaten to burst free.

The duo have a liking for cinema and several tracks are inspired by this theme. The sparse Fellini’s Thorn namechecks the Italian director, blending Henrique Laurindo’s melodious vocals with strumming acoustics, light percussion, rapid tambourine activity and some tempered electric guitar playing. The sub two-minute Ghost At The Lighthouse, inspired by a silent movie, provides an eerie moment where minimalist verses of strummed guitar and subtle percussion create an atmosphere.

Poignant effort Indian Hill – another oldie – is the only track to feature Lulu Grave on vocals and the timing seems right for its rehash, with lyrics like “I’ll turn around ‘cos I don’t belong here” seemingly more meaningful now, as the sad undertones now reflect the couple ending their own relationship. The split doesn’t seem to have damaged their output though: opener Another Day is built around an instantly addictive Teenage Fanclub like arpeggiated, jangly guitar line for a song that paints remorse with its message of “something always rhymes with goodbye”. The brief, seven-note electric guitar ditty is simplicity itself and the jaunty structure of the song does its best to convey its message in a sugar-coated way.

Said The Spider To The Fly is a major highlight, as a spritely guitar and mesmerising guitar solo lead-out delight alongside a Ride influenced vocal melody from when they toned down the feedback, but the two closing tracks steal its glory. Firstly, Dreaming Girl bounces along to Velvet Underground like racing guitars and tambourine for an addictive effort and then The Most Important Thing concludes proceedings with another sweetly sublime vocal melody set amongst simple chords before a damn fine yet super-simple guitar solo appears.

Sea Of Murmur isn’t going to elevate the band to a higher plane without considerable radio support. But those that have stumbled across The Tamborines by chance know, and it’s up to the Bills of this world to spread the word. People should be hearing Sea Of Murmur.

The Tamborines MP3s or CDs

The Tamborines on Spotify