The Anchoress – Confessions Of A Romance Novelist 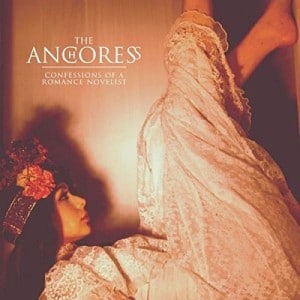 As the music world comes to the terms with the loss this week of the great David Bowie, it seems an appropriate time to celebrate the qualities of creativity and originality that he so consummately embodied. Of course, there will never be another Ziggy Stardust, but every once in a while, a new artist appears who is genuinely doing something different to anyone else out there. With the release of her debut album Confessions Of A Romance Novelist, Welsh song writer and multi-instrumentalist The Anchoress thrusts herself firmly into that category.

Its creator – real name Catherine Anne Davies – has been releasing music under her own name and as Catherine AD for several years and also had a period as an artist in residence at the London’s Southbank Centre, as well as collaborating with names as diverse as Emmy The Great and Simple Minds. So while it would be stretching things to say she she’s a total newcomer, her first offering as The Anchoress certainly feels like the arrival of an important new talent.

From the delicate music box tinkling of opening track Long Year to the stately piano and strings on the closing Rivers Of Ice, this is an album stuffed full of different moods and ideas; daring, confident, confrontational and packed full of vivid imagery. Davies is a PhD graduate in literature and queer theory (the study of “mismatches” between sex, gender and desire) and her academic background is a major influence throughout the record. The definition of an anchoress is a woman living in seclusion who has retired from the world, but in contrast to this Davies seems determined to reach out to her audience and share her views.

First and foremost though, Confessions Of A Romance Novelist is a high class pop album. Sure, the range of instruments and the lyrical themes employed are a pretty radical departure from the mainstream, but equally it’s not hard to see a track like Popular, with its bouncy rhythms and singalong chorus, at the top end of the singles chart (although it’s admittedly a stretch to imagine Justin Bieber writing lyrics about Russian tsars).

Other highlights abound in a consistently strong collection of songs. PS Fuck You, a slow building rock tune, is Davies at her most strident and acerbic, recalling of a former lover “you fed me your bullshit for so many years…I told you I loved you, and fixed you, and fucked you… I’d rather be on my own than back there.” The pain drips palpably from Davies as she sings – this is an artist who really means it. Conversely, the deliriously funky Chip On Your Shoulder is witty and playful, with the narrator warning the subject of the song “you know you’re going to get a little bit older/with a chip on your shoulder.”

Elsewhere, Davies uses her skills as a musical polymath and producer to winning effect – for example with the church bells and pizzicato strings that add ominous shades to the epic ballad Waiting To Breathe and the multi-tracked vocal harmonies – sometimes as many as 25 – she utilises throughout. Assisting her with this intricate sonic landscape is former Mansun front man Paul Draper, and the influence of the Britpop progressive rock oddities is certainly apparent in the widescreen arrangements.

Fundamentally though this is unquestionably Davies’s record. Pitched somewhere between the erudite anger of Sinead O’Connor and the radio friendly theatrical pop of Florence And The Machine, yet very much ploughing its own furrow, Confessions Of A Romance Novelist showcases The Anchoress as an artist of bold intent and kaleidoscopic ability. It is hard to believe there will be many more interesting, or better, debut albums in 2016.

The Anchoress MP3s or CDs

The Anchoress on Spotify