by Darren Harvey
published: 24 May 2010 in Album Reviews
Tweet 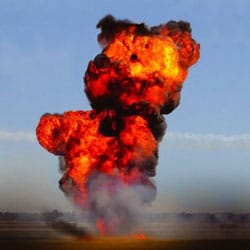 “You will never have a job; you will never have much in this town again. We’ll see to that because we hate you.” So goes the chorus to We’ll See To Your Breakdown. Whether ironic or not, it’s a queasy, distant opening to an album that’s so busy trying to be clever that it regularly fails to engage the listener.

Like the magazine and urban movement of the same name, The Chap are all about posture, poise, and cultural knowingness. Sincerity? Gosh no, old chap – that’s better left to the little people. You know, the sort of people who sport check shirts and moustaches without any sense of irony.

To be a Chap, it’s not enough just to know your pop culture backwards; you’ve got to demonstrate it at every opportunity. Well Done Europe takes us on a tour of just about everything from the last 40 years that’s hip again; and, just for good measure, everything that might well be hip again in the near future. Sure, Hot Chip do exactly the same thing; but this tastes more like cold fish.

And so, we get the cut-glass diction and considered non-musicianship of Brian Eno‘s ’70s pop period. We get the wired, nerdy funk of Talking Heads‘ middle period. We get the blessed-out polyrhythms and Balearic guitars of The Beloved and the shoegazing crew of the early ’90s. We get drumming from Adam And The Ants, syncopated B-Boy beats, elastic White Stripes riffs, and the detuned electronica of Boards Of Canada. Got all of that?

It all reads like a primer in how to be cool. And yet, surely, those who choose to invest in a record by The Chap are already primed. The resulting tone is one of backslapping, nod-and-wink, aren’t-we-clever cliquery rather than genuine cultural savvy. Cerebralism abounds throughout: chords, notes, and the spaces between them are calculated to within a nanosecond’s accuracy. The lyrics demonstrate competence in finding things out on Wikipedia (note the list of celebrity atheists which makes up the chorus of Obviously). That, or deliberately crap rhyming: “forget about the crunch / come help me pack my lunch.” Decidedly non-musical prose (such as the hoity-toity, housemasterly pep talk on Well Done You) is crowbarred into 4/4 notation. It sounds like music that’s been assembled from Technic Lego rather than played with any conviction.

Even more irritating than the buttoned-up, uptight posturing are the excruciating moments of hippity-hoppery. Exactly what are we to make of “kids are you ready for the summertime love” and “please please bitch”? Heaven knows.

The trio of Even Your Friend, We Work In Bars and Obviously sweeten the pill slightly, and arrive early enough in the album to create at least some level of engagement. The jerky rhythms of Even Your Friend approach danceability. We Work In Bars, a sly but honest observation about the true occupation of most artists and musicians, can at least lay claim to song status; perhaps on account of its rare sincerity. And Obviously, for all its smart-arsery, sounds irresistibly clean and bright.

As Well Done Europe progresses, though, there’s an overwhelming feeling that we’re being subjected to a comedy album without any jokes. Each track recalls the Ringo Starr number on a Beatles album: a whimsical palate-cleanser to prepare you for things more substantial to come. Only here, they’re never delivered.

The Chap MP3s or CDs

The Chap on Spotify

More on The Chap
The Chap – Well Done Europe