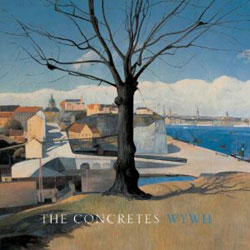 The Concretes‘ history is a chequered affair, with international hits, dramatic band member departures and an eventual re-emergence from a self-enforced exile. Whilst this has all the ingredients for a Hollywood narrative, WYWH plays out like a ’70s disco film where affairs and angst are laid bare to a sultry four-four beat.

It’s rather marvellous. From the opening of Good Evening, the bass and drums hit with massive, dry thuds whilst everything else, including Lisa Milberg’s whimpered vocals, rarely dare to challenge. This isn’t to say this is a literal drum and bass album, but the rhythm section runs this show with great finesse.

Good Evening also sets the album up as light years away from their past material. Whereas the preceding three albums veered from blustery to twee-folk to shambolic indie pop, each album had indie pop as its core. This is moody, spider-woman disco all the way. It’s grown up, less naïve and trusting, so now you dance to the beat or forget it; this won’t beg for your attention with tricks. As the track slowly grinds to a halt it provides an exhilarating start to the album, before one final instrumental groove kicks in, with guitars tearing through the propulsive beats and fading into high arpeggiated keyboards. This is as sensual, dance-inducing and bombastic as anything you’d hear in the clubs, and much more sexually ominous as well.

Throughout the back catalogue, even in their darkest moments, there was always a sense of whimsy or, ultimately, hope. That’s not here, only the reality of what the band have heard, seen and done over the last three or so years. Apparently former singer Victoria Bergsman announced her departure to the band in between the dress rehearsal and live taping of the band’s appearance on Tonight With Jonathan Ross for their second album. This left the band deflated and upset at what should have been their proudest moment, and their label EMI befuddled as to why the performance wasn’t a euphoric celebration. This album feels like the bleeding out of that moment and the consequent effects on their lives. It’s the declaration that they are now finally moving on.

Crack In The Paint puts dub reverb under saxophone bursts and tightly plucked guitar lines, with Milberg melodically talking as much as singing. It’s hypnotic and, with lyrics like “the dreams I dream/I tend to forget… the nights round here/are like cracks in the paint”, it feels cathartic and pained.

This isn’t to say the album is depressing – far from it – but it captures a feeling of the loner or down and out on an empty 4am dance floor, with possibly one set of eyes watching. In this light it’s completely romantic, hopeful and whimsical, but it doesn’t feel like that as you listen. Current single All Day playfully pairs flute with guitar to be a wisp away from cheesy, though Milberg’s declaration of “we’re gonna’ stay in bed/all day, all day, all day” remains open to interpretation as to whether it’s a lovers’ prolonged embrace or pure apathy toward life.

In the closing title track the band conclude deliciously. WYWH evokes a crisp, wind strewn dusk and a real sense of escapism into a comfort zone; in this instance, the rocky shorelines of Stockholm, most likely. The soft thuds and slinking notes recall both the Bee Gees at their most love struck and Broadcast at their literary bleakest. As Milberg sings “You and me, we’re just a postcard/wish you were here”, every beautifully painful summer romance comes flooding back. WYWH should be played seasonally to stoke the nostalgic embers of summers past, for it’s as equally hazy and precious as the memories it depicts.

The Concretes MP3s or CDs

The Concretes on Spotify