The Naked & Famous – Passive Me, Aggressive You 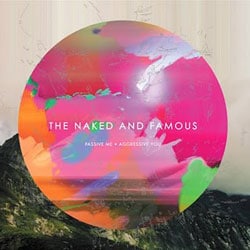 New Zealand’s latest musical offering The Naked & Famous arrive with great fanfare. In 2010, the quintet became the first act to debut atop the Kiwi charts for 16 years, and on this side of the world they’re riding on the anticipation that comes with being shortlisted for the BBC Sound Of 2011 critics poll. Incredibly, their debut album Passive Me, Aggressive You has been out for over a year in New Zealand. Now, finally, it hits the UK.

Theirs is a synthy, polyphonic blend, loaded with the pent-up emotion of adolescence, yet it never approaches emo; the Naked & Famous aren’t one-dimensional enough for that. Dreamy opener All Of This kicks things off, its breathy chorus and punching drums adding urgency to the ethereal synths. The tone is set for the album as they display purposefulness, control and poise – an arresting blend rare in a band so new.

It’s an album not short on anthems. The dripping synths and iconic riff of Punching In A Dream leaps out as an instant classic, and ought to be on everyone’s festival playlist this summer. With simple melodies punctuated with the lashing-out of clashing cymbals, teenage angst never sounded so good. This is synth-pop perfection, like MGMT but better. Meanwhile, new single Young Blood, with its signature line like a peal of bells, veers towards Yeasayer, shuffling wistfully along.

The anthems are testament to the band’s ability to pick out a tune. The gorgeously fragile, vocal harmonies on No Way are achingly beautiful, breaking out into a soaring finale. Elsewhere, the spread chords that open Eyes are warm and dawn-like, while the other-worldly piano of The Source builds anticipation perfectly on the transition into The Sun. The latter’s rolling lyrics wash over the listener in waves, bosom-heavingly driven and emotionally-intense. However – and this is the real virtuosity of The Naked & Famous – it’s all delivered with a masterful poise and control, channelling the intensity in all the right directions.

End number Girls Like You is a softly brooding masterpiece, carrying latent undertones of jealously (“How would you feel if nobody chased you, what if it happened tonight?”) From an unassuming beginning, it quickly ratchets up into a raw, heartfelt belter, with a lingering reflective hum at the end.

The true sign of a band at ease with their musicality is experimentation. At times this album borders on concept art. On a track called Frayed, the effect of Thom Powers and Alysa Xayalith beginning in unison before literally fraying into arrestingly offbeat contrapuntal harmonies is simply mesmerising. The only complaint here would be that the last note is sawn off instead of being allowed to resonate a little. It’s a bizarre production decision which isn’t at all in keeping with the musical accomplishment of the rest of the album.

Nevertheless, the genius of Powers et al comes out again on Spank, a song which begins with the lyric “I don’t remember the first time”. In a disorienting whirl of lyrics, touching on amnesia and hinting at paedophilia, Xayalith promises to “take it right back to the start” – the track cuts out and, after a few seconds, completely restarts as if nothing had happened, cranking up the intensity and roar of guitar a few notches further. As well as being perfect for a lengthy encore, it’s really fun to listen to.

As with most albums, there is a weak link, and it comes in the form of A Wolf In Geek’s Clothing, whose erratic guitar-crunching and airy vocals are interesting to listen to, but not as accomplished as the rest of the album. That, however, says a lot more about the overall quality of Passive Me, Aggressive You than about that of this individual track.

For all in, this is a glorious debut. The Naked & Famous are a band with that nigh-on impossible combination – the passion of youth and the control of maturity. Musically, lyrically and emotionally, it works. The more airwaves and stage time it takes over this summer, the better.

The Naked & Famous MP3s or CDs

The Naked & Famous on Spotify