The Offspring – Days Go By 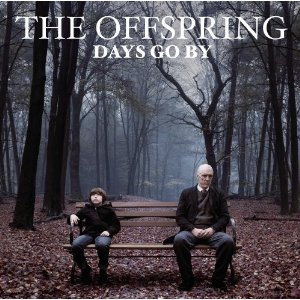 Like Britpop and so many other musical crazes, the pop-punk boom of the 1990s was a surprisingly diverse movement. Green Day goofed around for the cameras but their lyrics spoke of suburban alienation and angst, Bad Religion never went into the studio without a thesaurus to hand, and Rancid reached out to the British punk template for inspiration.

The Offspring, meanwhile, were cut from a more conventional cloth; always appearing more comfortable with mainstream success than their peers. And where more resourceful bands have either pursued a smaller, faithful audience, or reinvented themselves in their quest for global domination, Days Go By is the sound of a band who either daren’t risk or simply cannot conceive of a plan B.

This might not matter if plan A was some timeless and principled statement of non-comformity and stubborn resistance to fashion. But The Offspring’s trademark has always been a fusion of unconvincing angst and frat-boy humour, more comfortable in locker rooms and barracks than the bedroom. Despite the alternative veneer and Bob Rock’s punchy production, this is an album for those who wear their tight fitting jeans not with eyeliner, but a stetson – the title track and the simply awful I Wanna Secret Family (With You) are country-rock at their heart.

Of course, it wouldn’t be an Offspring album without the perennial attempt to repeat the success of surprise chart-topper Pretty Fly (For A White Guy), and with tiresome reliability there are two such novelty trinkets, containing between them more grotesque misjudgements than the Bloody Assizes. Oc Guns reveals a band mentality that thinks cod-reggae and wicky-wicky scratching might be a chucklesome wheeze, and Cruising California (Bumpin’ In My Trunk) may claim to parody pop when all it does is simply cling to its coat-tails.

So there are a couple of silly tracks – but then there were two silly Bennett sisters. Sadly, the remainder of the album is all Mary and no Elizabeth; devoid of life, wit, or energy. Days Go By can’t decide whether to rip off The Cult or Foo Fighters more, and All I Have Left Is You is as maudlin as it sounds – although according to the comments in a recent livestream, it has struck a chord with a man from Nashville who, while not posting anti-atheist photos on his Facebook, is “trying to keep my family together while the mother of my child has tortured us all”. Make of that what you will.

Honourable exceptions go to Dirty Magic and Slim Pickens Does The Right Thing, but as the former is a re-recorded version of a 1992 track and the latter is basically Bad Religion on helium, it’s not nearly enough to defibrillate this one. Of all those old pop-punk bands, the ones that have come through with reputations intact have done so by retaining a certain dignity as middle age approaches. The Offspring have traded theirs for radio plays and a few cheap laughs. Infanticide now.

The Offspring MP3s or CDs

The Offspring on Spotify