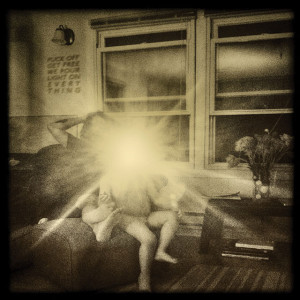 Since their inception in 1999 Thee Silver Mt Zion Memorial Orchestra have undergone various name, personnel and musical changes, but have always maintained an unwavering underlying aesthetic informed by their view of the world and their place on the outskirts of it. In many respects we may be living in bleak, bewildering times but they are here to show us that we are not alone, and provide a soundtrack to the surrounding alienation and disenchantment.

Fuck Off Get Free We Pour Light Over Everything is their seventh album (all released through Constellation) and it sees the band’s long term evolution continue as they deliver one of their strongest pieces of work to date. It follows closely in the footsteps of predecessor Kollaps Tradixionales but, taken as a whole, feels a louder, angrier and more intense record (impressive given some of the vertiginous climaxes on that album).

Fuck Off Get Free (For The Island Of Montreal) sets the early tone with a battery of serrated guitars and driving drums and grows in suitably mountainous fashion. The guitars are ratcheted up even more on Austerity Blues, reaching positively cacophonous levels. It is a deliberate, channelled attack with obvious political overtones and serves as an exciting reminder of just how powerful their music can be.

It is followed by the ferocious guitar barrage of Take Away These Early Grave Blues, the blues in question here being banished through sheer elemental force. It caps a thrillingly relentless opening trio and confirms their belief in the power of music to be as strong as ever (it is also still underpinned by a unshakeable sense of hope – something that will be familiar to anyone who has seen the stage backdrop to live shows by their parent band Godspeed You! Black Emperor). SMZ (inevitably) project a similar sense of anguish and disengagement to GYBE, but here it is more pronounced, directly articulated and nakedly emotional, and Efrim Menuck’s vocals are still raw, ragged and wayward but arguably suit the harder sound better than ever, as well as proving that the band are becoming increasingly defined by a brilliant punk crudeness.

The intensity drops on the piano-based Little Ones Run, the softer vocals of Jessica Moss and Sophie Trudeau offering a welcome pause for breath. It’s the only moment that remotely comes close to the post-chamber sounds of debut album He Has Left Us Alone But Shafts Of Light Sometimes Grace The Corner Of Our Rooms. By the time we reach What We Loved Was Not Enough, it feels like the album has entered some sort of mournful, regretful void, with Menuck’s isolated vocals hitting rock bottom and sounding as exasperated and helpless as ever.

Final track Rains Thru The Roof At The Grande Ballroom seems to almost limp over the finish line, exhausted and bereft from the sheer energy and emotion expended beforehand. We emerge from the album into the cold light of day somewhat dazed and maybe even a little overwhelmed, but in no doubt of the incendiary power of what has just been experienced.