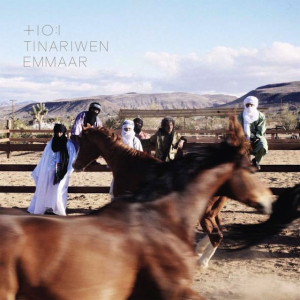 Few bands have a more fascinating and turbulent background than Tinariwen. Founding member Ibrahim Ag Alhabib witnessed his own father’s death aged four at the hands of the Malian military. His first guitar was made from a plastic water container, a stick, some rope and bicycle wire and inspired by watching a western.

He spent most of his twenties in exile in the Tuareg camps in Nigeria and Libya, away from his native Sahara, where he met fellow Tuareg exiles influences by a cocktail of North African music and western rock and pop. From there, they formed a band.

Eventually, the promise of full military training from Colonel Muammar al-Gaddafi enticed him and his bandmates looking for new opportunities. It was here where he met other fellow Tuareg musicians inspired by the sounds of North Africa and the west and with it the Tinariwen – deserts – collective was formed. From there, they would record for anyone who provided a blank cassette, but put their music on hold to fight for the independence of their people during the second Tuareg rebellion in the ’90s.

Tinariwen’s music reflects their time in exile, the repression of their people and a determination for political representation. Yet their music’s core arguably echoes that of the desert, their roots and location. Previous albums have been recorded in a makeshift studio in the Saharan desert – 2011’s Grammy winning Tassili being a prime example. New album Emmaar also has desert roots, albeit less torrid and American based ones: the band spent three weeks together “in a high house in [California’s] Joshua Tree”. Once again, political instability in northern Mali moved them elsewhere.

Recorded with support from Red Hot Chili Peppers‘ Josh Klinghoffer and Nashville-based Fats Kaplin, elements of Americana can be heard from the outset in album opener Toumast Tincha thanks to bits of slide guitar. Yet it retains that typically absorbing Tinariwen sound; Ag Alhabib’s vocals project a subtle sense of defiance, while the blues-infused North African riffs alongside the slow, earthy sounding smooth slide bring with it a sort of organic depth and feel. Meanwhile, following track Chaghaybou ambles along unhindered, with the guitar and percussion creating something more upbeat and lively, projecting with it a sense of freedom and being unburdened.

Timadrit In Sahara does have a sort of up-tempo 1960s American psychedelia to it, perhaps owing to Klinghoffer’s inclusion, and one you immerse yourself into easily. Imidiwan Ahi Sigdim slows things down again but is no less hallucinogenic and dream-inducing: one can imagine standing in the middle of Joshua Tree, staring at the stars above, listening to this. It has a transporting quality to it. Much like Tahalamot, too, which leans towards the Malian blues sounds of Ali Farka Touré.

Sendad Eghlalan has something of a mournful tone to it – as if longing for the Sahara – with vocals conveying this particularly while the slide guitar nestles in the background again, in turn arguably illustrating the contesting influences of home and their adopted temporary home of Joshua Tree. But the band soon turn it the other way, with Imdiwanin Ahi Tifhamam perfectly fusing country through Fats Kaplin’s fiddle and the quintessential Tuareg sound of the imzad. Here, the different environments are celebrated and embraced as one.

The album’s standout track is Emajer, which has a natural grace while retaining an understated sense of strength and force. There’s an emotional togetherness that resonates as they sing in harmony in the background, the airy sounding guitar instilling a delicacy while the bass helps tie everything together. Something rather humbling about this track, actually.

The coming together of cultures, much like what happened to Ag Alhabib all those years ago after watching a western, works brilliantly in Emmaar. It’s a truly absorbing listen, almost effortless. For a band that have been through so much turmoil, they convey so much beauty.