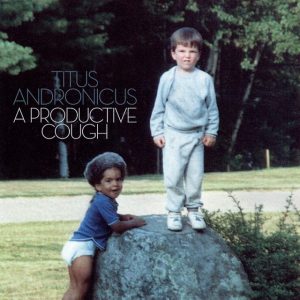 Patrick Stickles was always going to struggle to follow up 2015’s The Most Lamentable Tragedy. The last time we heard from Titus Andronicus, Stickles had gone all in with what he thought might have been the final hurrah from the band. A sprawling work of epic proportions, The Most Lamentable Tragedy was a punk-opera-rock’n’roll tale that touched on mental health, existentialism and the desire to occasionally cut a few rock star shapes. It was a work of genius and one that would be hard to match.

With A Productive Cough, Stickles has taken a short step away from some of the band’s history. There’s no punk explosions and definitely no convoluted storylines this time around. There are only seven songs on the album and some of them rely heavily on repeated vocal lines. Above the Bodega for example leaves us in no doubt that he can’t keep a secret from the guy at the store downstairs, whilst Home Alone is either a repetitive cry for help or cunning plan to get burgled with menace and claim on the assurance. We get it, nobody’s home, you’re home alone, now, where do you keep the family silver?

Musically it’s all fairly straight ahead too, with Stickles pretty much dropping the punk charge of the band’s earlier incarnations, and leaning more heavily on the classic rock influence that has always informed the band’s work, but perhaps to not quite this extent. Four of these songs stretch out beyond the seven-minute mark which allow Stickles and his assembled cohorts to jam, and this makes A Productive Cough feel like a live album recorded in the studio.

The jam nature of the album might show a band comfortable and enjoying playing, but the cover of Bob Dylan’s Like A Rolling Stone definitely outstays its welcome. Shifting the lyrics to put Stickles at the centre of the narrative as he reveals that he does indeed know how it feels to be a Rolling Stone (yes, even Billy Preston and Daryl Jones), but beyond this quick re-aligning of the song, it does feel somewhat uninspired.

There are definitely moments where the album drifts into bloated rock over-indulgence, but Stickles habit of writing engaging lyrics and looking at the world through a unique filter ensures that A Productive Cough has it’s moments of clarity too. Number One (in New York) channels The Pogues’ celtic folk and marries it to a seething rock bombast that never quite explodes. Stickles throws out some seriously bleak imagery, questioning society, the state of the States and his own position in the band as he mutters “eleven years in and trying to stay relevant.” He casts his critical eye over the USA again on Real Talk, a song that has a fair amount of Bruce Springsteen in its bones. A brass section and a catchy chorus almost detract from the fact that this is a song that highlights the trouble the USA (and the world) is in at the moment. Somehow Stickles singing “if things are as bad as the newspaper says, we’re in for a real big war” manages to sound not as distressing as it should; on this showing, Titus Andronicus could happily soundtrack the apocalypse.

The only hint of punk comes in the shape of the title of Crass Tattoo, a country ballad that bears more than a passing resemblance to Auld Lang Syne. It explains the importance of Stickles’ own tattoo but interestingly, he doesn’t sing on the song, allowing Megg Farrell to take vocal duties. The lines “my right arm, I dedicated to that noble cause/to dismantle authority and nulify all laws/And construct in their vacancy a kinder, juster world” make it clear that whilst you can take the punk out of Titus Andronicus, you can’t take it out of Stickles.

A Productive Cough is not a bad album, but it’s not Titus Andronicus’ greatest moment. Part of the problem comes from the high expectations set by the band’s previous work, and to some degree the drawn out jam sections that occasionally go on just a little too long. Dig deeper into the lyrics however, and you’ll find an album that at times has considerable depths.