by Ruth Follows
published: 2 May 2011 in Album Reviews
Tweet 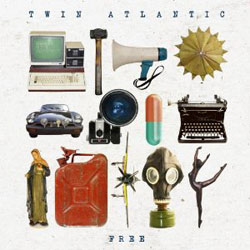 A famous wizard once said, “All we have to decide is what to do with the time that is given to us”. Wise words that Glaswegians, Twin Atlantic, would have done well to digest.

Their debut mini album, 2009’s Vivarium, saw critical acclaim heaped on the quartet with predictions that they might just follow in the footsteps of Biffy Clyro and Idlewild. Two years on, and that burgeoning optimism has not been cemented, as Free sees the band take a u-turn into teenaged emo-rock territory with catchy, sing-along choruses.

The record is big on rallying calls to its public, which will probably mean it gets its fair share of airplay from commercial rock radio stations. And no doubt Barrowlands’ circle pits will flail to Apocalyptic Renegade’s “I want it all, are you here with me?” and the plodding The Ghost Of Eddie.

In trying to widen their appeal, the band has ramped up the volume, instead of revisiting the drawing board to make a record that won’t just give them a short, sharp, temporary hit. As a result, many tracks (like Dreamember) are loud, but cluttered and messy, with clumsy harmonies in an already saturated mix.

There’s also something quite irritating about Sam McTrusty’s vocals on Free, which afforded subtleties on the debut now lacking. This time, he prefers to put strain on his words, making them sound like a pubescent male’s breaking voice; though his nasal tones perhaps wouldn’t succeed in being half as annoying, were the lyrical content not so overly simplistic.

Despite the fact that the phonetics of a Scottish accent naturally seem to pertain to an American twang, Yes I Was Drunk can’t help but draw comparison with American or Canadian rock acts like Nickelback. Its theatrical delivery isn’t believable, trivialising the track’s break-up story in the process. This also exposes the album’s skin deep, showy angst, which never manages to channel its energies in the right direction towards musical sensitivity, or clever lyrical metaphor, asFrightened Rabbithave done so well. Free’s motto of rock ‘n’ roll losing its fight is particularly ironic, as the very thing the band are fighting against sees them sink into the sort of petulance that will make them only temporary gods to an audience that won’t – and rightfully so – hold onto this music through the years.

Serious Underground Dance Vibes’ ridiculous name speaks volumes towards the fact that Twin Atlantic probably didn’t know what they were really trying to achieve in the track. Nevertheless, it’s one of the most interesting of the collection, and gives welcome breathing space from the incessant whining.

Twin Atlantic might be catchy, but woe betide this be used as a yardstick for measuring quality. There’s more than just a niggle that Free isn’t breaking new ground. More disturbingly, the album is a wasted chance to build on Vivarium, and isn’t as good as so much of the music it tries to emulate.