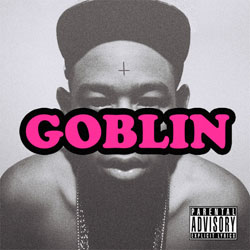 Chuck D, one of the godfathers of hip-hop and a progressive, intellectual musician who embraces the power of new technology, suggests that one of the best things new rappers can do is to form a group. He did it with Public Enemy in the ’80s when it was much more common. RZA did it with Wu-Tang in the ’90s as gangsta rap was taking off. Now, after the fracturing of many groups during the great fall of the major record companies, along comes Tyler, The Creator leading Odd Future Wolf Gang Kill Them All (OFWGKTA), a clusterfuck of Los Angeles teenagers and early twenty-somethings hellbent on speaking their piece.

However, this is not an Odd Future release per se. Goblin is the brainchild of Tyler, the de facto leader of the group and a hip-hop sponge. Although he claims to have odd influences (he shows mad love for teen heartthrob Justin Bieber on his Twitter account), Tyler still hits all the classic hip-hop targets on Goblin. There are the suicidal themes that come to a head on Yonkers – Tyler hangs himself in the video and simply announces ‘Dead!’ at the end of the track – that are a direct homage to Biggie Smalls. There are the misogynistic and violent tendencies – raping a pregnant woman and calling it a threesome, ‘kill people, burn shit, fuck school’ – that are a classic throwback to Eminem. Hell, there is even the ‘object of my affection’ song Her which, with its strong, detailed narrative and sparse production can be traced directly back to Biz Markie‘s Just A Friend. Although he does not directly talk about race or social class much, Tyler mentions here and there that his father was absent from his life, a regrettably common hip-hop trope that reflects the breakdown of the nuclear family in poor, urban, African American communities.

Sewn into Tyler’s bravado are insecurities about his public image, yearnings for female companionship, and, strangely, honest-to-God inspirational bits of advice on how to live life to the fullest. It is the listener’s job to parse out the messages and to put them into the correct categories.

Unfortunately, Tyler can get ahead of himself when he gets into self-referential, meta type statements. He prefaces Radicals with a ‘random disclaimer’ that instructs not to do anything he says in the song, and yet halfway through the track he starts dropping honest philosophy – ‘Stand for what the fuck you believe in, and don’t let nobody tell you you can’t do what the fuck you want.’ He then transitions from the blunt, playful refrain of ‘kill people, burn shit, fuck school’ (the content he was warning against) to the more honest and nuanced ‘fuck your traditions, fuck your positions, fuck your religion, fuck your decisions / They’re not mine, you gotta let ’em go…’

Goblin is founded on hip-hop traditions, but Tyler brings a lot to the rap game. At 20 years old, he has garnered worldwide fame by mixing brutality with playful adolescent jokes and references to pop culture (Dawson’s Creek, really?). He is already analysing his own fame – asking if he is really worth all the hype and not ever proclaiming himself to be the best rapper alive (which may be the one hip-hop tradition he has overlooked).

In fact, the whole album is pitched more or less as a session with his therapist, a demonically voiced alter ego who tries to reason with Tyler. This concept starts to make sense as the themes of overblown (fantasised) violence, poor luck with women, and family problems emerge over the course of the album – what better things are there to talk about in therapy? Tyler also proclaims over and over that his music is not for anyone but himself, a complicated paradox (which some might simply call hypocrisy) that has him appearing on Late Night With Jimmy Fallon while simultaneously blocking his record label from promoting his album.

By introducing the concept of rap as therapy through expansive, rambling tracks (that are admittedly a bit too trying on the patience to be played repeatedly), Tyler has certainly set himself apart from the endless sea of new young rappers. Once Odd Future coalesce (one young member, Earl Sweatshirt, was sent away to boarding school because his mother did not approve of the music he was making), they will be unstoppable.