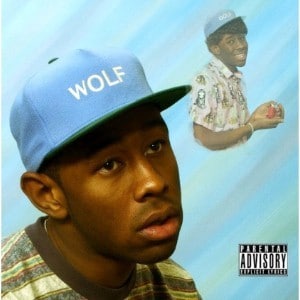 It’s hard to think of a more divisive figure in music over the last few years than Odd Future leader Tyler, The Creator. Since self-releasing his debut album Bastard in 2009, Tyler and his hip-hop collective have consistently managed to push boundaries and provoke extreme reactions to their nihilistic music. In fact, the initial impact of Tyler was not too dissimilar to the one that Eminem made back in the day, with many put off by the 22-year-old’s explicit and often violent lyrics.

However, as with Eminem, Tyler, The Creator’s shock tactics combined with his obvious talent as a producer, composer and rapper, meant that he had as many lovers as he did haters. His second solo LP and first major-label album, 2011’s Goblin, did nothing to endear Tyler to those who were put off first time around, with some critics even labeling the album demonic. In reality, Goblin was a mixed bag of an album and featured as many hits as it did misses.

As a result, Tyler’s third solo album, entitled Wolf, comes with the added pressure of delivering something that consistently lives up to the hype from start to finish, especially following Frank Ocean’s success with the Grammy Award-winning Channel Orange. While the two artists are not necessarily comparable, Wolf shows exactly why Tyler will always be Odd Future’s main man. It’s not only the the best of his three solo albums, it is also the melodic.

Kicking off with the grand, piano-led title track, Wolf proceeds to show that Tyler is beginning to perfect his craft. Awkward features atmospheric and hazy synths, as Tyler shows moments of emotional depth amongst the usual juvenile cynicism. “Your name’s still my password, so I’m always fucking reminded,” he raps, reminiscing about a young love. Then there’s the brilliant Answer, which sees him rap about his absent father over a melancholic and delicate guitar riff.

It may sound slightly cliché, but Wolf really does sound like Tyler has matured as an artist and is finally realising his true potential. 48, which includes a monologue from Nas, strays from Tyler’s usual introspective narrative to inspect a world ravaged by drugs, while the impressive Rusty cleverly hits back at his critics: “Look at that article that says my subject matter is wrong/ saying I hate gays even though Frank is on 10 of my songs.” Then there’s a plea for privacy on Colossus, which sounds very much inspired by Eminem classic Stan.

Another highlight is the addictive and angry IFHY, which sees Pharrell Williams drop in over sprawling synths and an almost circus-like beat. Tyler sounds at his most venomous on the song as he speaks about contradictory feelings towards a girl, while the sinister Cowboy is completely engrossing and dark. Elsewhere, upbeat single Domo 23 indulges in the explicit, mindless fun of Tyler’s previous releases over a rushing beat, before the hard-hitting and sneering Pigs deals with exacting revenge on bullies. “Gather all the bullies, crush them motherfucker,” he growls, over police sirens.

If there was a criticism to be levelled at Wolf, it would revolve around the length of the album and the sequencing of songs, which on occasions is a bit jarring. As is usually the case with Tyler’s albums, Wolf could probably shed a few songs – including the mildly irritating M.I.A send-up Tamale. However, as a whole, Tyler’s third album demonstrates that he does not need to rely on shock value alone to carry his music. We already knew he was a talented composer and producer, but Wolf suggests he now may just be the finished article.

Tyler The Creator MP3s or CDs

Tyler The Creator on Spotify