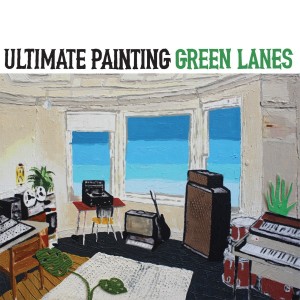 It’s only been a few months since Ultimate Painting unleashed, nay, tentatively proffered their flowery self-titled debut long player that more than hinted at the decade that first boasted freedom, promiscuousness and drugs (that’ll be the ‘60s for any aliens reading this) but album number two is already here, and unsurprisingly it’s largely more of the same.

Jack Cooper (Mazes) and James Hoare (Veronica Falls, The Proper Ornaments) came together after previously having toured with their separate bands and the lo-fi recording of their first effort has been repeated again. With an elderly neighbour taking umbrage whenever things got a little too loud, he inadvertently helped shape the home recordings to a degree where everything is far more watered down than it would likely have been in a noise-no-limits studio.

The first single from the new collection was Break The Chain. It’s firmly planted in the ‘60s, dominated by a spidery guitar line and then piano that reminds of The Beatles, the hazy summery feel guaranteed to enhance a warm evening sat out in the garden chatting to friends over a beer. Second single (I’ve Got The) Sanctioned Blues is a chugging foot-tapper about the UK’s benefits system that’s reminiscent of The Byrds meeting The Velvet Underground and, as with the debut album, these grooves are where Ultimate Painting excel, the mesmerising core worming itself into your being effortlessly.

Album opener Kodiak leans more towards Pavement and their disciples such as Parquet Courts but with less drawl and more cheerful vocal melodies and guitar spidery-ness. Perhaps the album’s best moment arrives in the shape of The Ocean, and the band themselves obviously see this as possibly the LPs pinnacle, gracing it with another of those pesky reprises later on. The spidery guitar line continues, this time alongside another companion guitar doing its own thing in harmony – it’s hauntingly brilliant, if a little subdued.

Paying The Price benefits from eerie sounding, delicately placed keyboard touches alongside more weaving guitars whilst Woken By Noises is the album’s (don’t laugh) most raucous moment; it’s played at a much faster pace and the electric guitar noodlings towards its conclusion are as manic as you will find.

Slower tracks like Sweet Chris and I Was Lost add a more dreamy effect and start to move away from the bands real strengths; nothing wrong with them, just a little uneventful on an already tempered offering whilst Tee Zee Em is little more than an instrumental interlude. By the time the decent melody of Out In The Cold arrives to close the album it’s all becoming just ever so slightly too nicey nicey and samey, even at a total length of just 31 minutes, when the era that Green Lanes echoes was all about 33rpm vinyl where each side lasted around 22-23 minutes.

Ultimate Painting certainly won’t ever be everyone’s masterpiece of a band and Green Lanes ain’t no Mona Lisa either. It’s a pastel water coloured effort that’s like The Byrds with less shimmering jangle, The Beatles with less melodious catchiness, The Velvet Underground with less fuzz and Lou Reed drawl: but it works. Its summery jolliness – despite some of its subject matter – will lift and carry the listener away on a dreamy cloud of nostalgia; make sure you catch a cloud before the wind turns.