by Graeme Marsh
published: 25 May 2015 in Album Reviews
Tweet 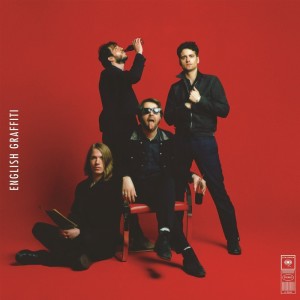 Third album in and they want to be as big as the biggest artists of the day, do The Vaccines. It’s this kind of ambition that’s often missing from young bands today; whilst the London quartet aren’t exactly the youngest any more, it’s an admirable quality that invariably has the effect of creating enough momentum to push expected results just that bit higher. Kind of like aiming for the stars and hitting the clouds.

Similarly, if you dress an old tramp in the finest threads available from Savile Row he’ll look the part but he’s still the same old tramp underneath the tweed. For their third effort, The Vaccines have taken their trademark indie-rock sound and tweaked it considerably, the result being, according to the band at least, a “genre-defining” moment. They want it to sound terrible in 10 years from now too, and that statement in itself gives much away to an English Graffiti virgin listener.

For outstanding single Dream Lover, ‘70s glam rock and ‘80s gloss, glamour and glitz mash together to create something like a weird hybrid of the past alongside a riff reminiscent of more recent Arctic Monkeys efforts – a strange concoction indeed, but one that works very well. It’s an excellent track, simplistic verses of atmospheric touches, brushes of guitar and then a catchy chorus create something akin to Broken Bells under a glam rock guise, but it’s also a supreme example of the band’s claim that they wanted to make a record for 2015; it’s not difficult to imagine yourself gradually becoming sick of the sugary sweetness on offer, such is its instant appeal.

Album opener Handsome is more like the upbeat, snappy, short bombastic indie-rock nuggets from earlier albums but it’s given a coat of the same gloss as Dream Lover. Undeniably, it’s infectiously catchy once more and the vibrant, bouncy vibe is destined to please many festival goers in the upcoming summer months. The racy 20 20 is even catchier: “I’m through thinking about you”, sings Justin Hayward-Young for another slice of sugar-coated pop. Bikini Atoll in the Marshall Islands was used for many nuclear tests by the US in the immediate aftermath of World War 2 and it becomes an unlikely catalyst for Radio Bikini, an upbeat blast of mayhem that sounds a little like The Monkees jamming with Devo, with percussion weirdly managing to mimic an explosion on every beat.

Elsewhere, there are other reference points to the ‘80s in particular. Minimal Affection utilises poppy synths and rubbery bass for an enjoyable cut whilst Denial swamps another infectious melody in swathes of pizzazz, its chorus of “please don’t turn the light off, I don’t think the conversations over” refusing to be pushed aside. The chorus of Maybe I Could Hold You then elevates a blandly versed effort into a far higher realm with its ‘80s splashed coating of glitz. The slow love song (All Afternoon) In Love is a little too sickly sweet whilst the similarly pedestrian closer Undercover drifts the album off with a sense of a yacht unexcitedly sailing off into the sunset.

English Graffiti is an all too easy listen, and the lack of attention needed to reap its rewards after just a handful of plays is probably rather telling. The band’s aim of it sounding terrible in 10 years’ time is a little odd but it could well prove to be incredibly accurate, such is the sugary textures found at most turns. It isn’t going to enable them to match the greatest artists of the day, but by aiming for the stars they do make a gallant attempt at reaching the clouds, if only occasionally, and its catchiest moments should please many listeners, if perhaps more new fans than old.