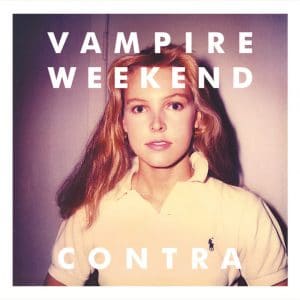 When Vampire Weekend first appeared in 2006, they seemed to strike the same regenerative effect into the indie-rock circuit that fellow New Yorkers The Strokes had managed at the beginning of the new century.

For, with the simple act of imbuing their songs with some Afro-pop rhythms, Vampire Weekend pulled off the not inconsiderable trick of making music that sounded gloriously familiar and intriguingly different and fresh at the same time. Blogs buzzed, indie-discos rocked and songs like A-Punk and M79 soon sounded like old friends.

And while there was nothing particularly original about a bunch of white, middle-class folk appropriating the sounds of the African continent (Peter Gabriel and Paul Simon did it 20 years ago, while Damon Albarn‘s post-Blur career has often found him jamming with Malian residents), Vampire Weekend did it with such fleetness of foot, only cynics found it impossible to be charmed.

Contra, therefore, arrives with the unenviable albatross of being one of 2010’s most anticipated releases. And it’s impossible not to see the ghost of the aforementioned Strokes, a future filled with increasingly underwhelming follow-up records and and a bewildering amount of solo projects.

Thankfully Contra can be judged, mostly, a success. Impeccably produced once again by the band’s keyboards geek Rostam Batmanglij, this follow-up to their eponymous debut they’ve kept the elements that made that debut such a hit, whilst also evolving their sound lest it go stale. Most importantly, they’ve retained that knack of penning an immensely catchy tune, as Holiday and Giving Up The Gun prove.

But for those who were irritated by the band’s preppy college image, there’s still much that may annoy. It’s impossible to deny that there’s a bit of a smugness to Vampire Weekend that irks somewhat. Erza Koenig’s lyrics, for example, make no sense whatsoever, giving the impression that he’s simply flicked through a dictionary, chosen a few obscure words, and strewn them together.

Take the opening Horchata for example: “In December drinking horchata, I’d look psychotic in a balaclava”. As in previous songs about Oxford Commas and Mansard Roofs, the overriding impression is that Vampire Weekend are considerably cleverer than you. While there’s nothing wrong with intelligence in pop music, it does reinforce the accusation that they’re overly pleased with themselves.

Such flaws can be overlooked, for the most part. When they’re on song, Koenig and company sound terrific. The frantic addictive ska-punk of Cousins could be the best thing they’ve ever recorded, two and a half minutes of guttural yelps, skittery, restless guitar riffs and even church bells thrown in at the song’s climax all mesh together to exhilarating effect. The festivals will be bouncing to this come the summer.

The most successful parts of Contra are where the band explore previously unexplored territory. There’s a sense of sadness throughout the album, such as on the terrific Run where Koenig wistfully imagines running off with his beloved to a land where “a little bit of conversation means so much”, while the stripped down Taxi Cab sounds almost desolate, with a haunting piano refrain echoing in the background.

It all comes to a head in the moody, poignant I Think UR A Contra, in which Koenig takes a look over the wreckage of a failed relationship – “I think you’re a contra, I think that you lie” over the soft sighing of some strings. It’s a step forward for the band, marking a move away from the indie-disco anthems into something more substantive and absorbing.

There are some mis-steps – California English employs Auto-Tune about two years too late – but overall this is a fine follow-up to their successful debut. Not only that, but there are enough signs that album number three could well be the classic that they’ve always threatened to make.