by Andrew Burgess
published: 13 May 2013 in Album Reviews
Tweet 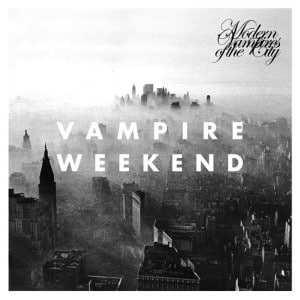 When Vampire Weekend released their debut album in 2008, they were selling a particularly American brand of upper-crust New England Ivy League study-abroad-influenced indie rock with notable African influences and popped collars. 2011’s follow-up, Contra, did a similar trick and while references to grammatical rules and Cape Cod architecture were not as immediately noticeable, the two albums are close cousins. But when the schtick grows old and the ivy withers on the vine, everyone in their darkest, longest, drunkest nights worries about growing old and being forgotten. And Ezra Koenig is no exception.

On their third full-length, Modern Vampires Of The City, Vampire Weekend feel like a band in transition, dealing with their own mortality, and looking to trade in their sun-bleached, pigeonholed world-pop for something with teeth. In place of Wayfarers and wardrobes supplied by Ralph Lauren and songs about trust-fund life at university, we get contemplations on God and death underscored by a sonically diverse and impressive musical palette rich with experimentation, pocket symphonies, digital manipulation, and surprisingly noisy guitars.

On Unbelievers, Koenig worries about whatever waits for him after the big light goes out. He sings: “See the sun go down / It’s going on down and the night is deep.” This grappling with life and death and the transition into the doldrums of all those graying, balding, potbellied decades that come after your 20s is a theme that runs throughout Modern Vampires Of The City. On Don’t Lie, Koenig asks: “I want to know, does it bother you / The low click of a ticking clock?” But it’s not all heavy stuff, even if there is a “headstone right in front of you and everyone I know”.

Diane Young, the album’s standout track, finds Koenig’s voice undergoing some intriguing stutter-start digital manipulation, pitch-shifting to hiccup out a rock ‘n’ roll melody that feels immediately singable, even if it really isn’t. Everlasting Arms opens with a string quartet before lurching into a damaged, circuit-bent, out-of-tune church organ run over pounding drums and a lament about learning to live without the one you love. Ya Hey (an inversion of André 3000’s Hey Ya?) features a more demonic kind of pitch-shift in the backing vocals as Koenig wails through alternately distorted and reverb-thick effects and the realisation that “The mother land don’t love you / The father land don’t love you / So why love anything?”

So, Vampire Weekend don’t sound like they could back Paul Simon on a revival tour of Graceland anymore. They also don’t sound like preppy white people with preppy white people problems anymore. In place of all this, there’s a maturity and longing underpinning Modern Vampires Of The City that hints at the sorts of problems plaguing a broader swathe of humanity. And amid all this existential and transcendental pondering, there’s the sense that Vampire Weekend have re-imagined themselves as the sort of band who could be doing this well into their 30s.