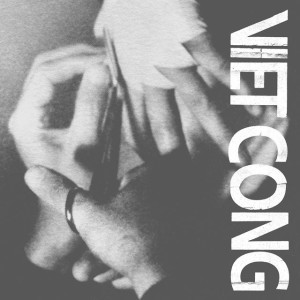 Following a spot of sibling rivalry culminating in an on-stage brawl between brothers Patrick and Matt Flegel, Canadian art-rock outfit Women slinked away and in early 2012 when guitarist Christopher Reimer sadly died in his sleep, there was no way back for the band. The same year saw the birth of Calgary’s Viet Cong, a new quartet led by Matt with no Patrick in sight; ex-Women drummer Mike Wallace, Lab Coast’s Scott Munro and Sharp Ends’ Danny Christiansen completed the foursome, with at least three of the four still holding down other jobs as the band awaits lift-off over two years later. But following the release of the debut eponymous album, things look set to change.

The album cover depicts a strong message symbolic of Viet Cong’s current state: boxer’s hands being wrapped in tape before a fight. Cassette, a self-released EP in 2013, was more like a sparring session before the main bout with the band seeing the tracks as mostly throwaway and a chance to hone their sound. The album – produced by Graham Walsh of Holy Fuck – however, goes for the knockout punch right from the bell.

Album opener Newspaper Spoons dives straight into tribal, echoey drums recalling Siouxsie And The Banshees, with icy, echo laden vocals sitting atop cold, bubbling synths and then for Pointless Experience, an electronic, skittering drum pattern alongside swathes of atmospheric guitar noise shattered by jagged, spiky guitars add in some Bauhaus and Psychedelic Furs as more post-punk influences appear. “If we’re lucky, we’ll get old and die,” repeats the message told within the lyrics; Flegel is still developing as a lyricist as brother Patrick was the chief writer within Women but these cold, bleak words fit the music perfectly. Single Continental Shelf is another Banshees meets Bauhaus effort, a scrawling wall of guitar being anything but welcoming, its tribal percussion weaving into galloping drums as it walks an icy path awash with angular guitars.

Things become even more primitive for March Of Progress, where undulating synth chords meet industrial percussion before vocals appear melded with cold, hollow bell-like tubes of synth driven mayhem and a pounding drum create a drug-induced dream that will push listening limits. But then a final section bursts into life for the best piece of music on the album as delicate bell-sounding synths and driving bassline form an intriguing conclusion. The eery screech of Bunker Buster will then penetrate the most resistant ears with a spiky guitar assault injecting an alarming electric shock into panic-stricken horror movie-like guitar choppiness and Silhouettes appears like an evil twin of a Bloc Party track before twisting into an up-tempo Psychedelic Furs indebted synth-backed guitar race. Perhaps the most striking effort though is saved for last; eleven minutes of Joy Division bleakness marrying with goth undertones turns into a cacophony of noise before stuttering into a broken, concluding passage that sounds a bit like Echo & The Bunnymen having a mental breakdown.

“The majority of people in Calgary are fuckin assholes,” Munro has stated; probably not only Calgary, if we’re honest. With music sounding this raw, vibrant and strikingly different to the current generation yet achingly familiar to those that will remember the original post-punk era, Viet Cong have tapped into something exciting, something too big to be contained in a Canadian city most famous for winter sports, and something that could just be the tip of the iceberg for yet another intriguing Canadian act.