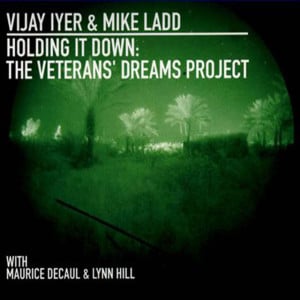 Sadly, this exceptional third album in an increasingly impressive and imaginative collaborative trilogy from jazz pianist Vijay Iyer and poet and electronic producer Mike Ladd emerges amidst some tedious jazz politics that threaten to undermine the wider cultural impact it should undoubtedly achieve. Following the release of his outstanding Accelerando album and a successful accompanying tour, Iyer was last month named as one of the winners of the Macarthur Genius Grant which, amongst other benefits, offers a sum of $625,000 (to be spread over five years).

Few jazz musicians can expect to earn this much in an entire career, so it is perhaps understandable that it provoked some resentment. It is nevertheless surprising that a musician as high profile and respected in the jazz world as Kurt Rosenwinkel should have so publicly denounced Iyer as something of an overrated fraud (“no touch, no tone, no melody, nothing exceptional in any way”). It’s certainly true that Iyer’s distinctive and individual approach to music probably favours rhythm and attack over subtlety, flow or melody – but this feels like this has very different aims from Rosenwinkel’s commitment to expanding the jazz tradition and lexicon.

Rosenwinkel subsequently apologised and claimed his beef was with the PR and media establishment rather than with Iyer personally, but what is arguably more disturbing is the wider backlash against Iyer from that very establishment. For some, he is delving too deep into purely mathematical and academic territory that renders him without commercial prospect (this is all relative of course, but he is one of the ACT label’s biggest selling artists for his trio and solo work, performs internationally, and has made a slow but steady journey from clubs to concert halls). For others, he is overly conceptual, making ‘interview music’ when the music should of course speak purely for itself (and thus reach an audience consisting exclusively of other musicians and jazz historians).

Holding It Down: The Veterans’ Dreams Project will do little to assuage the concerns of the latter camp, given that it emphasises the importance of words, ideas and wider human experience as much as the impact of the music. For this album, Mike Ladd adapted accounts of the dreams of ‘soldiers of colour’ who fought in the two major wars since 9/11 (Iraq and Afghanistan). As well as Ladd’s interpretations, there is a series of first person accounts from Iraq veteran Maurice Decal and also from remote drone pilot Lynn Hill.

The accompanying music certainly draws from both jazz and the avant-garde (and features some magnificent players including guitarist Liberty Ellman and celebrated cellist Okkyung Lee) but, like both previous Ladd/Iyer collaborations, it also delves deep into funk, electronica and hip hop to create a fascinating and often thrilling hybrid form. At all times, Iyer’s music ably supports and enhances the thoughts and feelings of these former servicemen and women. The result is compelling and beautiful; troubling and moving in equal measure.

It seems that judicious editing might also reinforce the impact of many of these experiences and visions. Iyer and Ladd seem to have an instinctive sense of where and when to place key lines or statements. Lynn Hill’s Capacity, with a single menacing, inescapable chord in the accompaniment, concludes with her responses to some thoughtful questions from Ladd and her description of a ‘cloud that follows you around everywhere’, representing guilt.

This is understandably a challenging listen, and one where every note and sound feels permeable to seeping dread or discomfort. The barely concealed tensions of Derelict Poetry provide a perfect vehicle for Iyer’s attacking, percussive approach to the piano whilst the eerie, unsettling There Is A Man Slouching In The Stairway captures a haunting fear. Much of this album feels like a struggle with memory, and it is vividly portrayed in both language and sound.

To call this one of the albums of the year feels trivialising and banal. More so than either of Iyer and Ladd’s previous collaborations, it represents something of a documentary triumph. It’s music as reportage – as useful to future historians of post 9/11 America as any newspaper report, piece of writing or video footage. Beyond this, the exceptional, imaginative music so brilliantly enhances the narrative, making this a cultural document of tremendous importance. It should not be lost in a sideshow of media and musical politics.