We Have Band – WHB 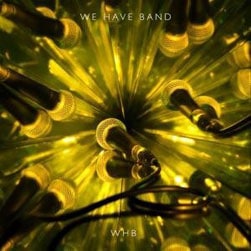 We Have Band – the London dance-rock trio whose debut album, WHB is the subject of much twittering anticipation – want to be taken seriously. And deservedly so. While their debut album has its share of plasticine dance-pop. It’s also thick with introspective and moodier, darker moments, hinting at a surprisingly well-rounded depth of influence behind the band’s more obvious desire to make you shake what you’ve got.

And at times the album, produced by Gareth Jones (Grizzly Bear, Interpol) is surprising in its angle of attack, earning apt comparisons to Joy Division, among others. Darren Bancroft and husband-and-wife Thomas and Dede W-P have obviously studied their art-rock history, from Talking Heads to TV On The Radio. It’s all just below the tumultuous surface.

The early singles Oh! and You Came Out display the band’s more pop-oriented side, each being infinitely danceable, perfectly packaged neo-discothequeries. But neither is as simple as it first appears.

Oh! smacks and shakes with bravado and a bass run that hints grinningly at some of Tom Vek‘s better stuff. The deadpan vocal delivery somehow calls up images of a chemically relaxed Devo. You Came Out features surprising David Byrne-like guitar runs, a whistling bit reminiscent of Peter, Bjorn And John, and a surprising array of Mark Mothersbaugh-tinged synthesizers.

WHB opens with a markedly brooding one-two punch in the form of Piano and Buffet. Piano takes its time burning through a minor-key synth run and the falsetto vocals (akin to those made chic by TV On The Radio): “We want to know what it’s all about.” Buffet ebbs and flows over dissonant guitar drones, navigating swampy waters.

Seemingly out of nowhere comes the breakneck pace of Divisive, which bounces and plunks in the same vein as Dead Or Alive‘s You Spin Me Round (Like A Record). But, surely, the comparison can’t be this obvious. Consider the gang vocal: “We’re all divisive, we’re all… Hey!”

The record is rounded out by the 8-bit-via-Duran Duran Dede-fronted Hear It In The Cans, and the stark and sombre Centrefolds And Empty Screens, the latter of which howls blearily and slinks in dark corners. Honeytrap seems destined for sweaty dance floors in cinderblock-walled nightclubs… in a good way.

On the album closer Hero Knows, Bancroft warns, “We won’t stay where there’s no one,” and “Don’t wish away the dark days. They’re the ones that make it all worthwhile.” WHB stands as a testament to the trio’s willingness to embrace the darkest of days, and to allow them to tint the fringes of their sonic palette. It’s an encyclopedic and admirable approach, really, and suggests We Have Band are the real thing. WHB is a debut well deserving of its preceding hype.

We Have Band MP3s or CDs

We Have Band on Spotify