Weezer – Everything Will Be Alright In The End 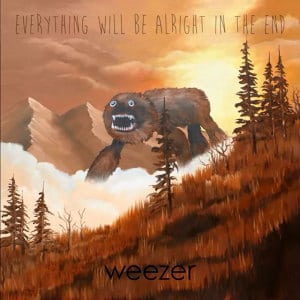 Weezer, the poster boys of twentysomething wallflowers, hit the airwaves again with their ninth overall full-length, the cosily-titled Everything Will Be Alright In The End. Rivers Cuomo thrives off self-references, and this release is no exception. Is it the much-talked about return to the Blue Album and Pinkerton? Does it have the peppiness of Hurley without the antiseptic pop sheen? With Cuomo’s ageless tenor, choral ooo’s, heavy metal-ish guitar riffs, and enough musical/lyrical allegories to 1994 that could definitely maybe fill up a Tribute To Pavement album, Everything Will Be Alright In The End sounds like… a Weezer album.

The opening is Ain’t Got Nobody, something that’s straight out of the Pinkerton era. References to the past are hackneyed as hell – even for Weezer – but Cuomo himself made the comparisons this time around, saying everything will harken back to the old days of faux-metal pop punk and Harvard shenanigans gone awry. It’s a strong opening – one that’s surprisingly anthemic for the band who built their latter-day career on actively avoiding such a composition.

Hell, with that in mind, Back To The Shack sounds straight off a ’90s Green Day release! The guitar licks and solos (real solos!) aren’t blasé in the slightest on this side of the millennium. Cleopatra rocks Cuomo’s Kiss obsession in the strongest way. There’s even three songs at the end that form of a suite of dueling guitar instrumentals. Clearly, Weezer’s got this whole rock band thing down pat after 20 years of playing hard.

The first sound on Ain’t Got Nobody is of a mother assuring her child that anything that her nightmares “will be alright in the end,” a shockingly sincere statement. A lot of Everything Will Be Alright comes from a child’s storybook. Look at the album cover: the great, fuzzy monster with googly eyes titled with Where The Wild Things Are font (there seriously needs to be a moratorium on using that). The silliness of Hurley and Raditude be damned; Cuomo takes a good, long look at adolescence and all its follies.

But isn’t that what he’s been doing for the past two decades? Pinkerton did confusion and self-hatred well because Cuomo was actually living it at the time, a compositional decision that suffered such extreme backlash that sent Cuomo on a regression to adolescence that he hasn’t exited for a longer time than most of his current listeners have been alive.

Cuomo’s commitment to being young takes away a lot of the sincerity that Everything Will Be Alright has to offer. The British Are Coming takes a line from the legend of Paul Revere that every American child can recite from heart by age six, but what’s up with the bastardizing self-pity in Eulogy For A Rock Band? Or the relationship-fearing Go Away? No, Weezer, you’re not the awkward band who never got success or respect – practically every university kid adored Say It Ain’t So and Tired Of Sex for some time of their academic career.

It’s tiring to hear the same stories of the poor boy who’s so-unloved-but-not-really. Cuomo may vehemently deny that he’s the “boy next door” on I’ve Had It Up To Here, but that claim is barely true if at all. This pathological fear of growing up is the main fault of an album that is so bent on the imaginative fancy of youth, a theme that is grossly underdeveloped.

But here’s a light at the end of the tunnel. Daddy issues were well-explored on Weezer’s debut, but Foolish Father shows how there’s some peace to be gained from forgiveness. So while Cuomo might be frustratingly stuck in himself, Everything Will Be Alright In The End shows that he’s taking the first trepidatious steps into an earnest reflection on what it’s taken to be the man he’s become. And seriously, that last suite is just a perfect series of rock out tunes. So maybe, even with faults innate and self-inflicted, just maybe, everything will be alright in the end. And that’s what makes this band continue to be so endearing for so many.