by Rob Mesure
published: 12 May 2018 in Live Music Reviews
Tweet 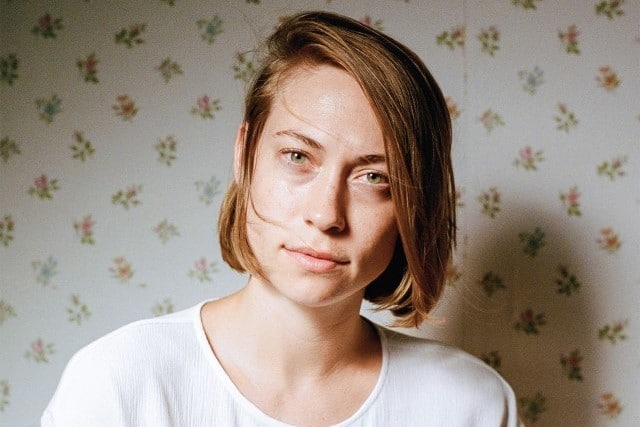 An all-too-brief nine tracks and 33 minutes long, Quit The Curse was released by Heavenly Records in February. A solo debut for Anna Burch, it came after years spent as a member of Detroit folk-rockers Frontier Ruckus, and a spell dealing in rough-edged twee-pop with Ann Arbor’s Failed Flowers.

Reviews were good – 75% on Metacritic good – and focused time and again on a comfortably fuzzy, relaxed, 60s-girl-group-tinge to it all. They were right to: the title track, In Your Dreams and, particularly, the towering With You Every Day boast tightly-woven harmonies, breezy and divine in warp and woof.

But there were other threads, and Burch was also lauded for her fraught, plain-spoken lyrics (“That stabbing hatred for you suddenly felt softer” – What I Want), unpicking various strands of relationships (usually) gone wrong. These are all things which Burch has, and, sure, her peers and predecessors have had them too.

But in these songs, the two rarely have to exist independently, the one somehow subsidiary to the other, and it’s this simultaneously guileless and beguiling quality which made Quit The Curse stand out, and which has crammed The Old Blue Last to capacity tonight. “It’s our first time in London,” Burch beams after the opener, “and our first sold out gig”.

With just the nine songs to pick from – Burch and her band play eight – it’s a short set, ending at a thoroughly reasonable (for a Wednesday) 10-ish, but one that delivers pretty much everything we’d hoped for. 2 Cool 2 Care and What I Want are slightly ungainly and jazzily insouciant, and Quit The Curse itself doesn’t suffer at all for the band’s admitted Buckfast over-indulgence after a gig in Glasgow the previous night.

The dreamy With You Every Day, all sublime cadences, awkward, almost dissonant chord changes and wordless, rapturous refrains is, predictably enough, the standout, but only Burch could play something quite so lovely and then immediately ask for the red lighting to be switched to blue – before the country-tinged, “lovesick and sunburned” Belle Isle – as she wants to “chill this out a little”.