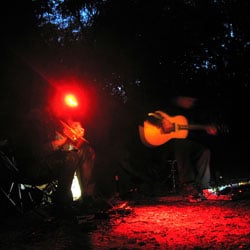 Blacksand describe their music as “Guitar Based Electronica in Unusual Places” on their MySpace page. As descriptions go, it’s an understatement.

It’s 5:30am. We’re going where dogs are walked, ancient trees grow and gays of a certain predilection thrill to tread.

Just off a perimeter road of London’s Hampstead Heath, a small group of people are huddled together, pointing at curious passing foxes and whispering about what might happen next.

Lemon Jelly‘s Nick Franglen appears from the gloom to guide us along a path atmospherically lit by sodium lights. This isn’t just an unusual place for a gig, but a decidedly unusual time, too.

Underfoot the dewy grass soon soaks shoes as we climb hills and cross streams. Eventually we arrive at a hollowed tree where Franglen’s Blacksand cohort and Akasha founder Charles Casey, somewhere underneath a red hat light, is twiddling with delay pedals and isolating hisses and buzzes. Franglen, dressed for the early morning chill in a warm jacket and wooly hat, joins him.

Blacksand know how to bring about a sense of occasion. Recent limited edition debut album Barn, consisting of just three unhurried, multilayered tracks, was recorded in a Sussex calving shed. Previous Blacksand gigs have taken place in a mine near Bath, in a Cold War era submarine stationed in Kent and in a gas turbine. An assortment of trolleys convey their array of pedals, mixers and assorted other paraphernalia to and from the site, with no trace left behind afterwards. It’s a world away from jangly indie-schmindie in a Camden toilet.

For power they’ve had purpose-built one particularly ingenious device. Based on a ship’s battery, this trolley also features a transformer and is expected to keep the band’s chilled, inspired sound going for up to an hour. Aside from the duo’s personal headlights, the only illumination comes from the fuzzy glow of the coming London dawn.

All of this would be beyond parody were it not for Blacksand’s echo-laden, guitar-looped soundscapes being other than perfectly suited to it. To call Blacksand’s output “guitar music” would be absurd; these distorted, layered sounds share more with the widescreen cosmic urges of Murcof. Casey’s slide sound contrasts with the twinkling, teasing notes of Franglen’s acoustic to create music at once intimate and internal. This largely improvised music has little discernible structure but instead relies on moods to convey a sense of something almost intangible; something else.

Occasionally the amps cut out, and a buzz disrupts the first part of the gig, but none of this matters. The invited audience are variously flat on their backs stargazing and observing ancient tree branches from curious angles, huddled against the morning chill. Even at the end of songs nobody wants to break the silence, spoil the mood or be the first to speak.

At the end we’re offered a welcome hot drink, but the kettle uses the last of the battery power and it’s left to the scouts among us to dispense the energising contents of Thermos flasks. As the dawn breaks and a huge blue sky opens up above us, the first dog walker on the Heath hurries past, trying not to look curious. She could guess, but she wouldn’t know; this gig was our early morning secret, and ours alone.