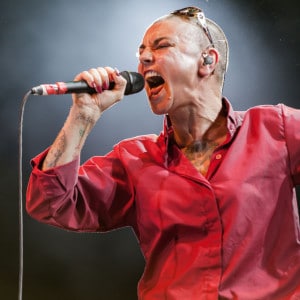 WOMAD 2014 takes place on the baked grounds of Lord Suffolk. Charlton Park is filled with tents, stages, mobile eateries, portaloos – and even la-di-dah loos for those that don’t like to defecate alongside the masses. But to say that WOMAD is a middle-class experience would be unfair. It is as inclusive as any festival, and certainly not as posh as Cornbury. Rugged buggies, mobility scooters and trailers for children are everywhere on-site. There is a craft ale tent. High-end audio purists Bowers and Wilkins have their own little tent and an oversized PA – yet this is still a festival.

The music begins on Thursday evening with a dub-inspired performance from the Malmsbury School Project on the Open Air Stage, followed by a wide-ranging Bollywood workout on the other side of the Arena in The Big Red Tent with Salim Sulaiman and his band. Mali’s Bassekou Kouyate proves a lilting virtuoso treat to close off the warm evening. The music will not start again until Friday afternoon, giving attendees time to experience other areas of the site. Perhaps a spot of meditiation, or laughter therapy, or a yoga session – or even a Gong Bath. Yes. A Gong Bath.

Reggae musician Clinton Fearon plays scratchy guitar through his Fender Twin and gets Friday underway with music designed to ‘Rock Your Bones’. His short dubby excursions are entertaining enough, and Fearon provides the crowd with further entertainment when he takes his shirt off. Hungary’s Söndörgö, however, prove to be a heavier offer. Looking like they’d just stepped out of University Challenge, the band proceeded to smash the Siam Tent with dizzying virtuosity, passion and a unique take on Hungarian Folk. It would prove tough for much to be able to follow this display, and New York’s Chicha Libre and their Cuban Funk (with Surf Guitar, no less), is somewhat uninspiring. 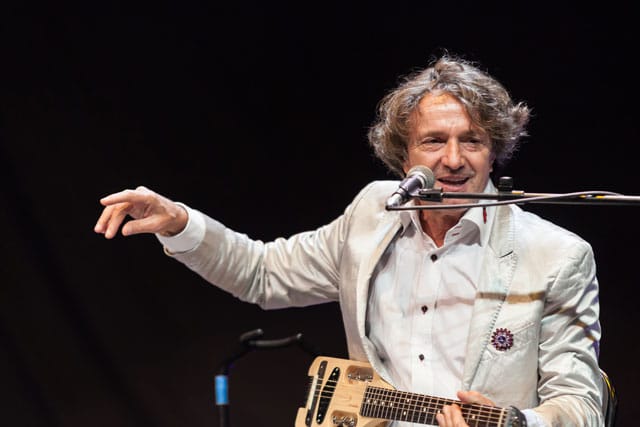 Conversely, the space outside the Charlie Gillett Stage is limited due to the number of people preparing to watch The Good Ones: a band comprised of survivors of the Rwanda genocide. Though the musicianship is limited (and they start with a new song especially written for England), WOMADians give the band a warm welcome and rapturous applause. The Good Ones provide a welcome relief from much of the polish polluting the site. Two short heavy showers cool the site.

Exposed feet, flesh and covered heads will remain the clothing order for the festival duration. Norway’s Mari Boine is late. Held up in traffic. How much traffic is there in Wiltshire? Her band set up. Nervous stage techs glance at their watches as though they were Gregg or John in a Masterchef semi-final. “I come from the other side,” Mari announces when she finally arrives. Turns out that it’s a song, and not an indication of where she’s been for the last 20 minutes. Mari has a great vocal range, and certainly there is a spiritual, and progressive appeal to her music – but there are enough New Age vibes on-site already. Goran Bregovic is also late. Traffic. His Wedding and Funeral Orchestra are fun enough, and no doubt provided an inspiration to Gogol Bordello. His set is a foot-stomping Gypsy roll through the Balkans, with a special mention for the UK’s Romani people. 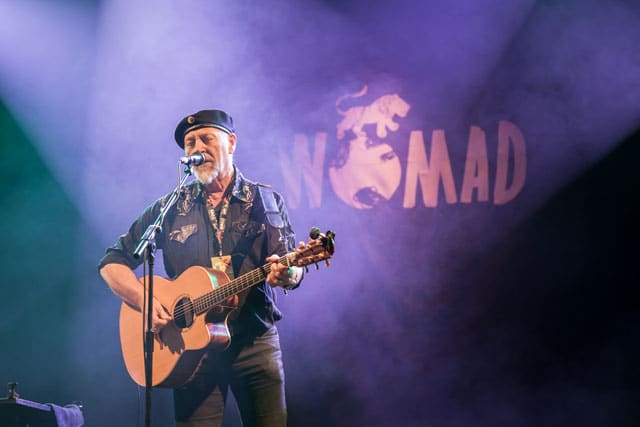 Richard Thompson brings to an end a thrilling Friday. His self-deprecating humour charms, while his astonishing playing and singing captivates the audience. Recalling his old Fairport days, he sings Sandy Denny’s Who Knows Where The Time Goes? Judging the mood perfectly, he sings I Want To See The Bright Lights Tonight, and WOMAD goes out into the night.

Saturday comes, and people are asleep in any shade created by the morning sun. They shelter behind signs, under trees and in the large tents in the arena. Somewhere, Peter Gabriel is speaking. Two men with koras start playing. Passers by gaze on. People in stalls start singing and dancing and crowds gather to watch. The site is good-spirited. Amira Kheir takes to the stage and sings The Desert accapella to a wilting audience. She looks not unlike Erykah Badu, and jazz-inflected soul numbers such as Alsahraa only add to that admittedly trite comparison.

It’s a relief to the audience camped out under the shade of Big Red that Hazmat Modine aren’t providing any extra heat. A series of classic instruments line the stage, including a sousaphone. The band – ably led by the sweaty Wade Schumann – take the audience on a waltz through America’s rich, traditional musical heritage. Their musical concoction of blues, jazz, funk, soul (and more) is appealing enough to entice the crowd off their feet, off their picnic blankets, and into another era. 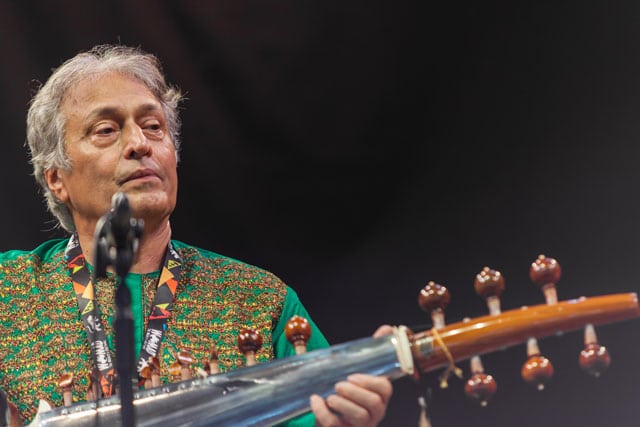 With so few Western genres left untouched, it’s deeply exciting to bear witness to Ustad Amjad Ali Khan take his audience to other dimensions fuelled by nothing but three Sarods and Tabla. Beginning with a take on one of Rabindranath Tagore‘s folk songs, there are a few mistakes throughout the set – broken strings here and there. The PA has a strange ring-modulated squeal to it, but that all adds to the other-worldly dimension. Someone lights a spliff thick with Afghan Black, and probably imagines they achieve Nirvana.

Snarky Puppy like it here in Europe (they said so on their last record). They are, of course, late (traffic), but once they get started it’s really very easy to see why the UK would clutch this nonet amid its chubby, sunburned arms. The Pups (brilliantly led by bassist Michael League) are fluid, capable musicians who probably snort Steely Dan for breakfast. Their take on contemporary forms, such as hip-hop, and other bass-driven genres is fuelled by a love for the progressive ultra-sharp musicianship of the 1970s. Snarky Puppy are a band that create festival moments and will be remembered as one of the highlights of WOMAD 2014. To not have been there, is to have missed out. 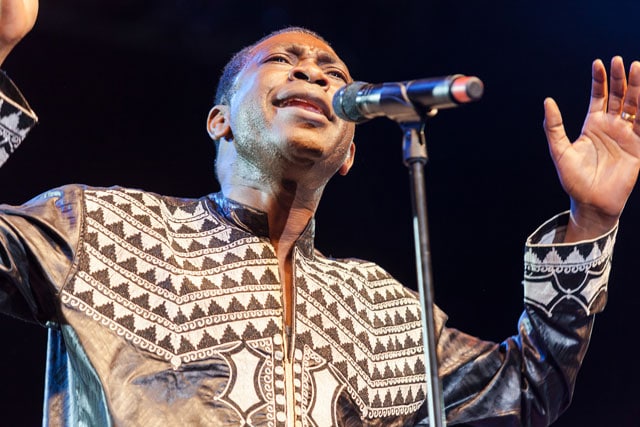 Kobo Town’s calypso is perfectly suited to the current climate, but having seen saxophonist Linsey Wellman’s circular breathing, it was hard not to feel a little short-changed. A similar feeling arose watching Beardyman too (in the exclusive, overcrowded, one-in, one-out Bowers and Wilkins tent). His custom Beardytron 5000 is a great tool, but his claim to be creating a live album fuelled by the audience on the day was somewhat misleading as no crowd involvement was required, and Beardy had written all the songs already. Still, it’s nice to hear a riff on Goldie’s Terminator. Senegal’s Youssou N’Dour and his Super Etoile de Dakar have packed out the arena in front of the Open Air Stage. Though he still performs 7 Seconds, the first part of his set is everything WOMAD should be: exciting, surprising and engaging. Brilliant.

On the final day, Dakar’s Nuru Kane performed twice – once electric, and again unplugged. His troubadour stylings generally best suited to impassioned guimbri thrumming acoustically backstage. Ukrainian quartet Dakhabrakha provide yet another WOMAD moment with their enchanting, theatrical show that is given extra poignancy given recent events in their home country. Oddly beguiling, occasionally deliberately atonal, their incredible vocal harmonies collide with furious drumming. Their music takes on an electronic shape, the tent becomes a church – the crowd push to rave. Ukranian raps and accordians deliver a crescendo that stuns WOMAD to a moment of rare silence.

From the sublime to the dancehall – Jamaica’s Stylo G bounds around Big Red’s stage professing his love for UK grime and rapping over Caribbean riddims pounded out by his band. A strong set (particularly for the young audience present), it could have been even better if Stylo didn’t bother with the band – and just stuck with his DJ and a pair of Pioneers. Bangers like Soundbwoy, Call Mi A Yardie and Press Up simply don’t need a live band. Somewhat ironically,

The Radiophonic Workshop (with a combined age greater than that of The Rolling Stones) are regenerating. Dick Mills is in the tent doing something unfathomable with a Tascam reel to reel machine, and showing the audience a green, metal…thing – that Delia Derbyshire used. Korg, Roland, Akai, Yamaha – vintage and new – are all exploited by these pioneers to create a sound that is somehow very familiar.

Nitin Sawhney plays his usual brand of bland over at the Siam Tent, and is curiously well received, proving that the sun can indeed alter people’s ears and brains. Thankfully, Sinéad O’Connor brings the festival to an explosive close demonstrating both a ferocity and tenderness that the late Bobby Womack would have surely appreciated. Foregoing any mawkish tendencies, even Nothing Compares 2 U takes on a new cloak. A reflection on WOMAD 2014, perhaps.