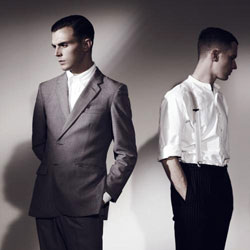 Every year the NME Radar tour seemingly throws together a random selection of bands, chucks them in a tour bus and watches them slowly bemuse and enthral in equal measure. This year’s line-up is no different, with New York’s Darwin Deez supplying the full geek quota – imagine Napoleon Dynamite, but with less sex appeal – and Manchester bands Everything Everything and HURTS delivering the brooding, smartly-presented dance-pop.

Given the stylish nature of what’s to follow, Deez and his overly enthusiastic band set about distancing themselves as far away from studied cool as humanly possible. Their 30-minute set is peppered with some pretty impressive choreography, with each band member busting some moves to various ’80s hits, including The Bangles‘ Walk Like An Egyptian. At one point, they perform a pitch-perfect remake of those dance battle scenes from various music videos, before throwing in some moves a la Beyonc in the Single Ladies video.

What could be a disaster actually comes across as genuine and very funny. It’s just a shame that when the dancing stops, the original music starts and though his debut has its moments – Radar Detector has an undeniably brilliant chorus, as does Constellations – much of it is just threadbare versions of much better songs by The Strokes. Hey Mom, a new song, kind of sums the performance up; it’s catchy and hummable, but it’s also weirdly forgettable and with the lyric “Hey Mom, don’t change my room, keep all my toys”, it’s just a bit creepy.

The bright white lights and plumes of smoke that herald the arrival of Manchester four-piece Everything Everything initially signals ‘serious musicians about to play serious music’. Luckily, the whiff of Editors is dispelled as soon as singer Jonathan unleashes that falsetto of his, or the band work through a brilliantly complex shift in tempo. Forthcoming single Schoolin’ is simultaneously playful and artily detached, whilst early single Photoshop Handsome causes an outbreak of dancing even Darwin Deez would be proud of.

During the break between bands a giant screen descends so that we can’t see what’s going on behind it. Its presence is practical and yet as it ascends and the two main members of HURTS are revealed (alongside a keyboardist, drummer and, yes, an opera singer), it suddenly becomes the perfect dramatic introduction.

Of the three bands it’s this Manchester duo of vocalist Theo Hutchcraft and keyboardist Adam Anderson who come with the most hype. Dressed immaculately in a dark suit with a crisp white scarf draped over his shoulders, it’s Theo’s stage presence that you notice first of all. During Wonderful Life he flits between almost sullen disinterest to heart-wrenching passion in an instant, one minute staring into the middle distance and the next urging the crowd to get involved with a sudden raising of his arm.

It’s easy to dismiss HURTS as all style over substance, but the key thing about them live is the quality of the songs. Of the eight songs performed tonight, not one features a dud chorus and at least four of them could be Top 5 singles. Sunday and Silver Lining build from fairly innocuous beginnings into barnstorming pop monsters, whilst current single Better Than Love morphs into the ’80s dance colossus it hints at on record.

There is a moment, however, during the ballad Blood Tears & Gold, where the simplicity of the songs becomes glaringly obvious. Couples in the crowd start to hug each other, plastic beer cups are raised and as the chorus blasts out you realise it could easily be a Westlife single, albeit if they had an Ultravox makeover.