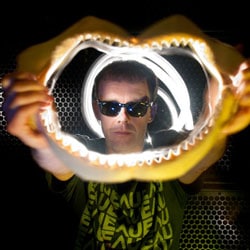 Once again Victoria Park was East London’s venue of choice for a big live music event. In a year in which the park staged a more successful than usual Field Day and an expanded Lovebox, as well as Underage and High Voltage, this time it was the turn of an all-new dance music spectacular with the inaugural London Electronic Dance Festival.

Unfortunately, things had already gone a bit sour a few days before any tunes were spun with the cancellation of several of the star turns lined up for Friday’s bill. With the first day’s line-up slanted towards commercial house, it was a massive disappointment for Axwell and Sebastian Ingrosso, two thirds of the globe-conquering Swedish House Mafia, to have pulled out just days ahead of the event. With AN21 and Max Vangeli also being announced as no-shows, Day 1 began to look a little bare. Maybe they all had office jobs to go to. After all, it always seemed strange to hold a two day urban festival on a Friday and a Saturday when there was a whole Bank Holiday weekend available. Could it be the organisers had an eye on events in Clapham Common?

It took a quick wander around the site (tiny in comparison to the space used for Lovebox) to discover just the one stage outside and one tented arena. Aside from that there was a small fairground and the usual selection of caterers, but really not much else to entertain the masses who, at 40 a day, might have hoped a few extras.

Heralded by three days of continuous rain, the site was a bit muddy, but had been blessed with good weather on the day. Which was fortunate as miserable conditions could have finished the event off completely.

But enough of the miseryguts descriptions, what of the music? Timing was everything and the early afternoon sets were unsurprisingly rather lacking in atmosphere as most people presumably planned to arrive after their working day. We caught the Audio Bullys and Dutch DJ Afrojack, the latter doing well throwing in occasional huge crowd pleasers (think Benny Benassi‘s Satisfaction and Example‘s Kickstarts) among a selection of amorphous tracks. By the time he signed off with his own beat-tastic take on Imogen Heap‘s Hide And Seek, the empty space was starting to busy up.

Calvin Harris was one of the few big names left on the bill, and shunning a full live act, he instead put in a DJ set that was neither this way nor that. There’s only so much commentary one can make on a day full of DJ sets, and when they’re as unimaginative as this, there’s even less to say. He ensured it was heavy on his own tracks and gave his audience a straightforward, generic time. The music was no worse and no better than what you could expect from a typical night out in a local nightclub.

Over in the tent, the “Planet Turbo Arena”, everything was uniformly electro and techno with the likes of German project Zombie Nation and Tiga jetting in from Canada. Providing something totally different at the main stage was none other than Soulwax. After a day of seeing solitary men standing in the middle of a stage behind a set of decks, it was refreshing to see the four of them looking natty in their matching suits and performing as a full band. Of course they weren’t here to focus on the alternative rock of their past, but instead tear things up with a set merging disco and techno and largely played out live. Chucking in a brilliant We Love Animals, it stood out by a long way as the best performance of the day.

With some trepidation we awaited the arrival of all-round DJ superstar David Guetta. He’s littered the charts with some of our least favourite songs in recent times, but with an open mind we hoped that he’d give us some party times to end the day. After all, who doesn’t love dancing in a big field? He did at least take things up a notch on stage, with his DJ booth up high on top of a construction lending itself, appropriately, to a tower of LEDs. He also employed a couple of spark-breathing, laser-glaring robots and, while there was a touch of the narcissisms to the arrows pointing upwards towards his Godlike being, at least he did something visual and interesting. Nearly two hours is a long headline set anywhere, and after a while we wandered off to see the Bloody Beetroot Death Crew playing over at the Planet Turbo Arena. However we came back to enjoy Guetta’s Sexy Bitch and his Kelly Rowland tracks – even without the superstar vocalists appearing live.

First day over, and the feeling we were left with was like we’d spent the day in the dance area of a larger festival. That’s fine when you have other areas to check out, but with just the two stages hosting a weak line-up and without enough variety to keep us entertained, it simply didn’t justify the price tag. Would tomorrow save it?