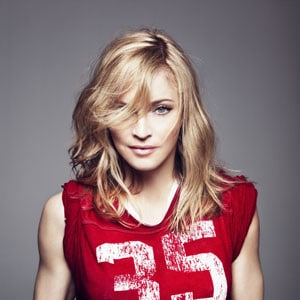 It was American Independence Day when the lady known as Madge, Mrs Ritchie, The Material Girl or just plain old Madonna ambled into town for six nights at the 15,000 capacity Earls Court Arena. Needless to say, every night of the Drowned World tour was sold out well before the first night in Barcelona, for this was no ordinary pop concert. So, despite being sat in a vast space with far too many other people in west London on a very hot night, one felt somewhat privileged to be finally witnessing probably the world’s biggest star ever live in action.

Predictably, a huge gay fanbase turned up, boys holding hands and parading matching skintight t-shirts and silver beaded chains, girls holding hands and wearing identical stetsons – these preposterous hats being almost the only Madonnaesque items on sale. You could have yourself a programme for 25 – bargain, considering how famously outrageous the ticket prices were. Famous members of the audience included the specimen known as Sir Elton John and the leggy lady known as Elle MacPherson – but these minor celebs, like the rest of us, were here to witness one of pop’s chameleons, a lady with more disguises than the Scarlet Pimpernel – and in the city where her public schoolboy bit of rough was born.

Mexican waves from the grandstand audience members preceded a relatively quiet start for the Queen of Pop after she popped out of the stage floor. We were launched into Drowned World / Substitute For Love, sung beautifully of course. Things quickly hotted up with the suitably titled Impressive Instant, Beautiful Stranger (complete with Austin Powers video snippets and lurid psychadelic flourescent whirls spiralling manically around the stage monitors) and Ray Of Light, a track that was quite simply as sublime as it was infectious. With the audience on its 30,000 feet and a stunning stage setup and superb lighting, the band and dancers were all at the behest of ‘er under the spotlight as she transformed from blonde, kilt-wearing musclewoman to Japanese geisha for a bit of Ang Lee-inspired flying martial arts – for Frozen (much the better for actually having a recognisable beat unlike the studio recording) we were treated to a stage act dominated by Madge in a sado-masochistic take on satantic worship, chained half naked model males all subjugated to their mistress (bet even the gay ones loved every minute of it).

Nobody’s Perfect, Don’t Tell Me and several of the other Mirwais-produced tracks from Music had the crowd trying to second-guess the vagaries of Parisian house music beats and falling over themselves in the process, while thankfully omitted tracks included the bilious American Pie. Then around the middle of the set (we thought at the time it was the middle anyway), things tailed off for a quartet of songs which were rather patchy despite their visual renderings – including I Deserve It which was of course dedicated to aforementioned public schoolboy, Madge again appearing from under the stage and with yet another costume complete with guitar (and yes she can play it). She delighted the mob by declaring how pleased she was to be dedicating the song to him in the city of his birth, before launching into the first line; “This Guy was meant for me and I was meant for him / This Guy was dreamt for me and I was dreamt for him”. Aaah.

A particularly sedate version of La Isla Bonita was offered with flamenco dancing and a dark-haired Madge providing sensuous vocals amid an almost rustic Spanish setting. Although one other oldie would be played at the end of the set, this was it as far as dredging up old material was concerned. It is hardly surprising considering the transformation of her music that has happened in the last two albums – in no small part due to the association of William Orbit and Mirwais Ahmedzal.

I couldn’t help but hanker after the stuff she was playing on Top of the Pops when I was a nine-year-old – Like A Virgin, Material Girl or even some of the later stuff (especially Like A Prayer, Vogue and Erotica), for I’m sure they would have brought the house down. Still, she was here as much to be the artist as she was to entertain and such songs as these would grace a farewell tour sometime next century. After a hillbilly song dedicated to London on account of independence day and Gone (again very sedate) and the first panic-inducing bars of Don’t Cry For Me Argentina (toilet break time), it was time for Holiday, which was nothing short of wild, mixed with Stardust‘s Music Sounds Better With You. She looked like she was loving it and looking supremely confident; but when the encore started and ended with Music (inventively interlaced with Kraftwerk‘s Trans-Europe Express) it seemed that we’d had the set cut short for not cheering and stamping quite loudly enough to please her Madgeness.

That said, you’d struggle to find a better show than Drowned World and you’d find it difficult to find a mainstream artist who can command near-universal respect for anything like as long as this fine lady. One could almost judge the artist by what was left out – she could have so easily given everything away, kept nothing back and been far less interesting, but when she asked the audience to come closer, knowing full well that they were stuck behind barriers and a huge space and couldn’t, she displayed that temptress quality which has beguiled us for nearly two decades and that, combined with her exquisite music, is why Madonna is so special. Long may she continue enthralling her planet.