by Alan Ashton-Smith
published: 17 May 2015 in Live Music Reviews
Tweet 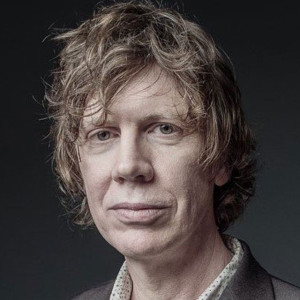 The bass drum bears the hallowed words Sonic Youth, a major clue that noise rock legend Thurston Moore’s set is not going to sound too far removed from the seminal work of his former band. There are other clues too, such as the strips of tape stuck beside the tuning pegs on Moore’s guitars, reminders of the unconventional tunings he favours. And of course, the line-up he has assembled to complete the Thurston Moore Band – the same line-up that played on his first post-Sonic Youth solo album, The Best Day, which proudly and unashamedly recalled his old band.

It is quite a line-up. On drums, Steve Shelley, also formerly of Sonic Youth. On bass, another noise rock legend, My Bloody Valentine’s Debbie Googe. And on guitar, James Sedwards, best known for his work with jazz/noise group Nøught, and a guitarist well capable of holding his own alongside a player of Moore’s calibre. Moore himself looms over the music stand from which he reads his lyrics. He drops laconic asides by way of stage banter, drily celebrating the birthdays of a couple in the audience and playfully chiding Sedwards for tuning up over his anecdote about a misheard LL Cool J line.

Although the past work of all four musicians looms large, the set is forward looking, drawing mainly on The Best Day, and also showcasing three new tracks. Moore comes pretty close to promising us a new album for next year: the band are currently writing and recording together, and the record is apparently set to be titled Rock ‘n’ Roll Consciousness.

They kick off and round off with new material – the long-fused slow-burner Aphrodite, and the punchy Cease Fire – but it’s the song that they drop midway through, Turn On, that’s the most promising new track. In fact, it’s quite possibly the best song played tonight: perhaps overzealous praise for a song one has only heard the once, but it really is strong stuff, by turns the most melodic and the most complex music of the set, and featuring a cracking solo from Sedwards.

Elsewhere, the setlist coheres thanks to the contrast between sharp, intense songs like Germs Burn and Detonation, and the more languorous, but no less powerful, pieces like Speak to the Wild and Forevermore. During these latter tracks the playing becomes almost hypnotic, chord changes sometimes coming so infrequently that they seem jarring. When Moore and Sedwards become locked in exchanges of mono-chordal fretting it’s the rhythm section that cuts through and anchors the performance, Shelley composed behind his kit, and Googe standing impassive as she hammers out relentless basslines.

Oslo’s excellent sound system is perfectly suited to this detailed, enveloping music. Sure, it’s loud, but every note and beat comes through with absolute clarity, even when Moore is standing up against his amp, mining for feedback. Sound, talent and innovation come together here in a holy trinity of noise rock mastery.