Justin is a dedicated fan of music, movies, books, the internet, and writing about himself in the third person. Fresh out of university (and currently working at the university he attended), Justin is deciding what path to take on this quizzical journey called life. His academic interests include linguistics, cognitive psychology, western humanities, Latin, classics, and critical theory (sometimes). Having grown up in his older brother's shadow, Justin's musical tastes were concerned with mostly so-called classic rock, '90s grunge, and alternative until his late teens when he moved away from home and fully discovered the past and present offerings of indie rock, hip-hop, and experimental music. It was about this time that Justin began to revel in The Smiths, Morrissey, The Clash, Joe Strummer, and other combinations of legendary performers and their iconic bands. Feel free to contact Justin for informed discussions on topics ranging from Why Human Language Differs From Animal Communication to How One Achieves The Worst Sounding Recorded Guitar Sound Possible. 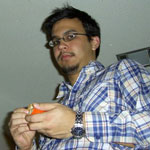 The Hold Steady – Heaven Is Whenever (Album Reviews)

Pavement – Quarantine The Past: The Best Of Pavement (Album Reviews)

OK Go – Of The Blue Colour Of The Sky (Album Reviews)

Badly Drawn Boy – Is There Nothing We Could Do? (Album Reviews)

50 Cent – Before I Self Destruct (Album Reviews)