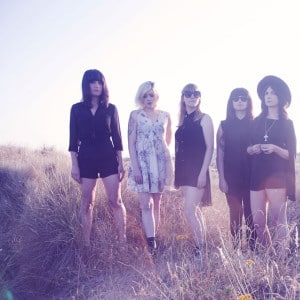 For a band barely two years old, September Girls should prove more than a one-month wonder. Formed in Dublin in 2011, the five-strong all-female band rapidly recorded some demos and began booking gigs, before releasing a handful of well-received limited edition singles on various cassette and 7” labels – most recently on the Haus of PINS cassette label run by their kindred spirits PINS, with whom the band have also toured. And now, they’ve awoken a slumbering world with their pounding drums, buzzsaw bass, angular guitars and reverb-drenched vocals.

September Girls kick off the new release schedule in January with their debut, Cursing The Sea, with the opening title track serving as a sub-two minute ode to long-distance heartache. It’s an apt title for the album for a band with four adept songwriters, as many of the tunes deal with distance, insecurity and inner turmoil, which allude to an overall sense of being adrift.

Their stylish blend of reverb-soaked noise has already turned heads at Rough Trade who will make their debut its album of the week shortly. Named after a Big Star song via The Bangles, the band is Paula (bass/vocals), Caoimhe (guitar/vocals), Lauren (keys/vocals), Jessie (guitar/vocals) and Sarah (drums). Drawing inspiration from the likes of Phil Spector, The Velvet Underground, The Cure, My Bloody Valentine and The Jesus and Mary Chain, they blend distant layered harmonies, swirling organ and distorted guitars into a well-proportioned yet edgy, while always tasteful, noisy brand of rock.

The lasses fit in well on the Fortuna POP! roster with their innate sense of pop precision and classic harmonies and Cursing The Sea surely has the legs to take them deep into uncharted waters.