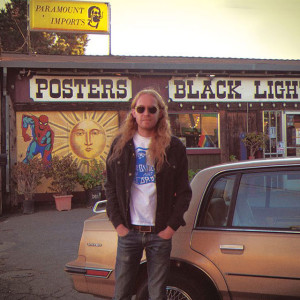 Do you enjoy music that makes your face feel like it is melting? Arise Morgan Delt. As Los Angeles’ answer to Syd Barrett, young Delt dropped jaws and turned heads after unleashing his self-produced six-song cassette Psychic Death Hole early last year. The psychedelic power and joyous freakery of his effort encouraged label Trouble in Mind to sign him up, and the result is an entertaining self-titled debut LP arriving at the end of January.

While you may be tempted to sit and stare gormlessly at the cover art and its acid-dosed flowerdelia for hours, we heartily recommend you put the needle down and get locked into Delt’s seemingly simple, yet stunningly complex fuzzed-out melodies. On the heavyweight opener of Barbarian Kings, the first seconds throw the listener for a loop – is it a RZA-produced stomper? Or a Byrds-gone-wrong death waltz? With Delt laying down a savage beat for a picked guitar line, he cunningly introduces his languid, reverb-laden singing to kick-off the album’s throwback psychedelic pop vibe. But despite the prevailing haze, the music is far from lo-fi and marries real bite with a charming sense of joyous, leftfield rock.

Delt sums up his genre-bending mission nicely with the observation: “I think we’ve become unstuck in time and everything is going to happen all at once from now on.” And it does seem like he’s rolled up the past 40 years of the freak power singer-songwriter into one majestic beast of an LP. But when it comes time to show his gentle side, Delt can also excel. Just check out of the charming Obstacle Eyes with its multi-layered jangling guitars and submerged glockenspiel, where Delt turns out his most tender singing on the album.

Citing influences from Curt Boettcher to West Coast Pop Art Experimental Band, it’s clear he’s partial to California’s post-Beach Boys golden age of oddball sunkissed pop. By expertly adding layer upon layer of mindblowing – and often contrasting – passages until each tune is piled high with stylistic hooks, Delt shows that he’s well-versed in the art of songwriting. While he could do with a bit more oomph behind his singing at times, he’s undoubtedly just written the soundtrack to the summer.