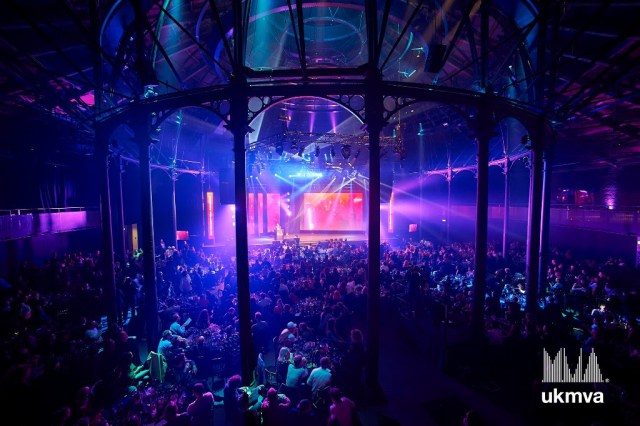 The UK Music Video Awards 2018 took place at the Roundhouse.

Last Thursday saw the UK Music Video Awards take place at the Roundhouse in Camden. As in previous years it was presented by Adam Buxton who has become closely linked to the art form due to his involvement over recent years in the much loved BUG shows at the BFI. Like BUG, the awards ceremony proved to be a night that celebrated the art form of the music video and the many creative minds and teams behind them.

Perhaps not surprisingly given the attention it received on release earlier in the year, the video for This Is America by Childish Gambino dominated, picking up three awards along the way – Video Of The Year, Best International Urban Video and Best Cinematography In A Video.

The video for Big God by Florence & The Machine also had a successful night, scooping the awards for Best UK Rock Video and Best Choreography In A Video. The video for Shahmaran by Sevdaliza also received multiple acknowledgement, winning the prizes for Best Visual Effects and Best UK Alternative Video.

Young Fathers were rewarded for the consistently high standard of videos for their tracks In My View, Toy and Holy Ghost over the last year. Dua Lipa followed up her success last year in the Best UK Pop Video category by coming out on top in the same award this year with the video for IDGAF. In the Newcomer categories the video for Colossus by IDLES won Best Rock Video – Newcomer and the video for Wannable by Leyya picked up the award for Best Pop Video – Newcomer.

This year’s Outstanding Achievement Award went to Carrie Sutton who has established herself as one of the leading individuals in music video production over the last twenty years, contributing videos for the likes of U2, Blur, Supergrass, Goldfrapp, Snow Patrol and others. Tonight saw people from across the industry pay tribute to her work.