by Helen Clarke
published: 22 May 2015 in Blog, London Gigs
Tweet 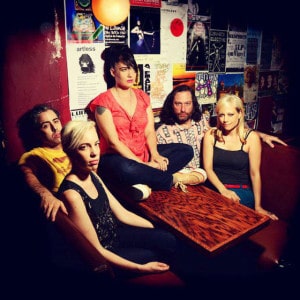 This week sees the ultimate gig clash that will leave riot grrrls seething, as legend Kathleen Hanna (fronting new(ish) band The Julie Ruin) rocks into town at the same time as newly reformed Babes In Toyland.

The former narrowly snaps the title of ‘gig of the week’, thanks in part to their jaw dropping, ear splitting record, Run Fast, but also the sheer wait we’ve had to endure to finally see them play over here. The band were forced to pull out of the show – originally scheduled for LAST May – after Hanna was rushed for urgent treatment for the Lyme’s disease she’s battled over the last decade. So all in all, it’s destined to be a blisteringly exciting show.

Announcement Of The Week
The people behind Visions festival,which takes over six venues in east London, have annoucned their final line-up for the all dayer on 8 August. It includes Camera Obscura, Holy Fuck, Jens Lekman, Girl Band, Gazelle Twin and Fat White Family. Tickets are on sale now.

The Julie Ruin MP3s or CDs

The Julie Ruin on Spotify