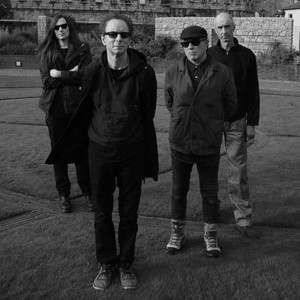 Darren Hayman‘s Occupation series of monthly shows at Dalston’s Vortex continues this week, with two shows on Wednesday and Thursday, featuring performances of January Songs, a project where he wrote a song for every day of the month. Check out his This Music Made Me feature here.

Post punk veterans Wire (pictured) will be helping the Lexington to celebrate its fifth birthday on Friday.

East India Youth‘s debut album Total Strife Forever is out this week. We love it, and reckon you might, too. Find out if you do at his instore gig at Rough Trade East on Monday.

Two new venues stage their launch parties on Thursday. In the old ticket office by Hackney Central Station, Oslo has its weekend late license till 3am in place and craft drinks and food to supplement an already busy upcoming schedule of gigs featuring Peggy Sue, Chrome Hoof, MT and Indiana. More here. Meanwhile, over at the O2 in North Greenwich, Brooklyn Bowl’s second branch throws open its doors to reveal an 800-capacity concert venue, 12 lanes of bowling and food ranging from pizza to oysters. More here.

Chris T-T and The Hoodrats – Lexington

Riot Grrrl legend Kathleen Hanna’s band The Julie Ruin – which features her former Bikini Kill bandmate Kathi Wilcox on bass – are set to play at the Tufnell Park Dome on 22 May.

Lily Allen will make a live return to mark the 275 year anniversary of children’s charity Coram, when she hosts City Rocks, at the Royal Albert Hall on 1 April. Guests will include Maverick Sabre and Sophie Ellis-Bextor, with more to be announced.

Young Husband are set to release their new single, Left Of The Rocks, next month through Sonic Cathedral – hear it here – and to mark the occasion they’re playing some live shows, at the Shacklewell Arms on 21 January and Madame JoJo’s on 28 January.