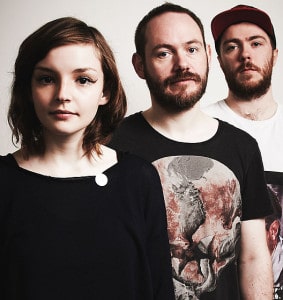 John Grant‘s Pale Green Ghosts is bound to top many ‘best of’ lists at the end of the year. He’ll be reminding us why at the Jazz Cafe on Thursday.

Scottish synthpopsters CHVRCHES bring their freshly released The Bones of What You Believe to Brixton Academy on Thursday. We were impressed with their debut, awarding it four stars, calling it “an album full of dynamic, dance fuelled synth-pop…and the hype is justified.”

Catch Laeitia Sadier, of Stereolab, on Saturday, who headlines at Daylight Music – two hours of free music
at the Union Chapel, starting at 12pm.

Andy Burrows and Ilan Eshkeri will get you feeling all Christmassy in the atmospheric surroundings of Islington’s Union Chapel when they bring their BAFTA-nominated soundtrack to The Snowman and the Snowdog to life with a run of live-to-picture performances. They’ll be joined by The London Metropolitan Orchestra for the shows on 12-14 December.

Boy George is set to debut tracks from his forthcoming album, This is What I Do, at a free instore show at Rough Trade East. Fans buying the album from the Brick Lane store from 28 October can pick up a wristband for the show on 13 November.