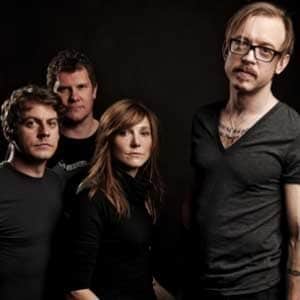 It’s a week of gigs in London that may be missing some of the bigger names you’d expect to see but this allows us to happily highlight some promising shows that otherwise may have got lost in the crowd.

Sweet Billy Pilgrim release their third album Crown And Treaty today, and it is a wonderfully consistent, listenable offering. Containing hints of the emotional resonance found within Elbow‘s finest moments it revels in the beauty and joy of simple, honest songcraft, and delivers results far greater than the sum of its constituent parts. They play a show at Hoxton Square Bar + Kitchen on Tuesday, with support from Revere. Next time it’s likely they’ll be playing bigger venues.

Another pick is the show by Sea Of Bees (aka Julie Ann Baenziger) at the same venue on Thursday in support of second album Orangefarben.

Francois & The Atlas Mountains have already enjoyed a degree of success in 2012, supporting the likes of King Creosote & Jon Hopkins and receiving warm praise for their debut album E Volo Love. In our review we remarked how it was “a floating collection of pretty, charming tracks that wholly evoke France” and you can hear them when the band play their biggest headline show to date at Cargo on Wednesday. Emeli Sandé is another artist who’s enjoyed a good year to date. The Scottish soulstress released debut album Our Version Of Events earlier in the year and she plays the Shepherd’s Bush Empire on Monday.

There are also plenty of excellent experimental/leftfield shows that should not be overlooked. Initial impressions of Gallon Drunk’s new album The Road Gets Darker From Here have been very positive indeed, their sprawling, dirty guitar-post-punky-blues sounding fresh and invigorated. You can catch them play a small show at the Lexington on Wednesday. Elsewhere, pianist Matthew Bourne appears at the Vortex on Monday alongside Sean Noonan, (read about the former’s excellent album Montauk Variations album here), Barn Owl bring their burned-out guitar landscapes to Café Oto on Thursday whilst veteran German avant-electronicists Mouse On Mars showcase the dizzying sonic excess of latest release Parastrophics at Village Underground on Friday.

The Hives – Borderline – 1st May