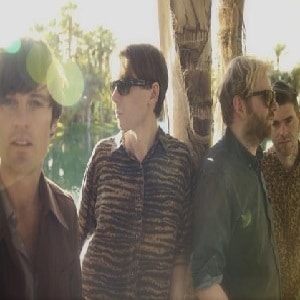 Franz Ferdinand mark their rearrival with a show at the teeny Electric Brixton on Tuesday, ahead of the release of their new album, Right Thoughts, Right Words, Right Action, on 26 August.

We were impressed with Little Green Cars’ debut album, Absolute Zero, saying: “The band’s ability to contrast their often dark lyrics with upbeat melodies ensures that there is much more to the record than first meets the eye.” Find out for yourself what they sound like when they play at the Sebright Arms on Thursday.

Julianna Barwick’s show at the Southbank’s Purcell Room was one of our highlight of this year’s Yoko Ono-curated Meltdown festival. We said: “Barwick makes predominately a cappella and mostly wordless music built from looped vocal exercises and underpinned occasionally by ambient FX, clanging piano notes and dubby basslines.” So expect stunning results from her show at St Giles on the Field church on Saturday.

Fortuna Pop!’s Joanna Gruesome are set to release their debut album on 16 September, and they’ll be marking the occasion with a launch party at the Shacklewell Arms that night. Listen to the first single from the album, Sugarcrush, here.

One of the most unlikely supergroups, Tired Pony, is set to play at the Barbican on 14 September. It sees Snow Patrol’s Gary Lightbody join forces with REM’s Peter Buck, Belle and Sebastian’s Richard Colbourn and Jacknife Lee, amongst others. The seven-piece will perform their second album, The Ghost of the Mountain.

Two Door Cinema Club will play their biggest show to date, at the O2 Arena, on 13 December, while Gabby Young will call into the beautiful Union Chapel on 25 October.

Islet have announced details of their second album, due for release on 7 October. Fierce live performers, their show at Dalston’s Birthdays, on 16 October, will be something to behold.