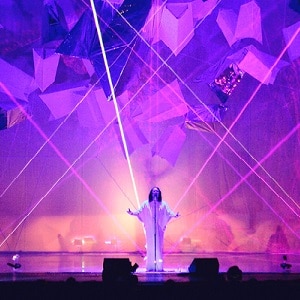 This week sees Thom Yorke-led supergroup Atoms For Peace take up a three-night residency at the Roundhouse – the band’s first live outings in London. If you missed out on tickets, you can watch the show by buying individual tracks or the entire gig, via Soundhalo – surely the first of many such ventures.

Expect big things over at the Royal Opera House later in the week, as Anthony And The Johnsons join forces with the Britten Sinfonia for the first London performance of Swanlights.

Following a Glastonbury set that was heavy on new material, Smashing Pumpkins will again be airing new tracks at Wembley Arena on Monday, with support from Ash, while Wu-Tang Clan will call into Brixton Academy on Friday, as part of their 20th anniversary tour.

Aussies Scott and Charlene’s Wedding have added more London dates to their extensive European tour; they’ll be playing a free instore gig at Rough Trade East on 2 August before heading over to the Old Blue Last to play another free show later that evening. They’ll also be playing at an inpop all dayer at the Shacklewell Arms on 4 August.

The Southbank Centre have announced their September programme, which include Live_Transmission Joy Division Reworked, celebrating the work of the band in an audio-visual collaboration between Scanner, the Heritage Orchestra and visual artist Matt Watkins, on the 21st, as well at shows from Caro Emerald, Diana Jones and Krystle Warren.

These New Puritans are set to play at Electric Brixton on 15 October, while a couple of days later, on 17 October, CHVRCHES will play at Shepherd’s Bush Empire.

Eels will extend their stay on our shores, following a string of festival appearances, playing at Shepherd’s Bush Empire on 7 September, and folky sister trio, The Staves, will also be calling in at the Empire on 4 November.