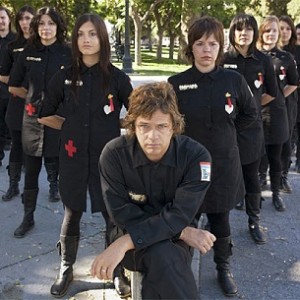 It’s a good week for free gigs in London town, with The Polyphonic Spree playing an instore show at Rough Trade East on Monday ahead of their headline show at Village Underground the next night. Brilliant noise popsters Flowers play a free show at the Old Blue Last with Hatcham Social on Wednesday and Rough Trade West have got Jackson Scott in on Friday.

Elsewhere, Darren Hayman continues his residency at Vortex Jazz Club on Thursday and Café OTO has some mind bending shows in the shape of Mensch Mensch Mensch on Tuesday and Josephine Foster on Wednesday.

Leeds trio Sky Larkin are set to make a live return ahead of the release of their third album. Motto is coming out on Wichita Records on 16 September – they’ll be calling in at the Lexington a day later.

Young Husband will be releasing a limited edition version of their next single, Silver Sisters, on cassette to mark Cassette Store Day next month. They’ll also be playing a mini tour, taking in the Lexington on 24 September.

Johnny Flynn has announced details of his forthcoming, third album, Country Mile, which Transgressive are pushing out on 30 September. Before that he’ll be embarking on a pretty massive tour, including dates in America with Mumford And Sons, and then promoting the album with some UK shows in October, including Hackney Empire on the 10th.

Ed Harcourt will bring his sixth album, Back Into The Woods, to Islington Assembly Hall on 15 November.