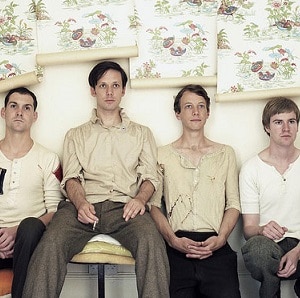 With the chocolate scoffed and the most magnificent bank holiday of the year over, you’ll be in need of some aural delights to get you through the week, right? Good job we’re here with our usual look at who’s playing live in the capital over the next seven days, then!

The wonderfully bonkers Fair Ohs are preparing to release their second album, Jungle Cats, in May. See the video to one of its songs, Ya Mustafa, here and see them at White Heat at Madame JoJo’s on Tuesday.

British Sea Power also have a new album ready to go. Read our review of Machineries Of Joy, which is out this week, here. To mark the occasion they’ll be playing at The 100 Club on Wednesday.

If you’ve got the time and energy, Swans’ show at Koko on Thursday is well worth investing both in. We saw them play a two-and-a-half-hour set at the same venue last year and awarded them five stars.

Elsewhere, Ace Bushy Striptease are well worth checking out on Thursday if you like your indiepop infused with a punkish venom, while The Leisure Society play a free gig at Rough Trade East on Wednesday.

The best of the rest…

The raucous Pissed Jeans have announced their first UK live dates for five years. The Pennsylvanian punks will call into Dingwalls on 5 July to air tracks from new album Honeys.

After the recent release of her third album, Sudden Elevation – her first sung entirely in English, Iceland’s Ólöf Arnalds will return to the capital for a show at St John’s Bethnal Green on 4 June.

Miles Kane has announced a short UK tour this summer, taking in Camden’s Dingwalls on 7 June, when he’ll be officially launching his new album.