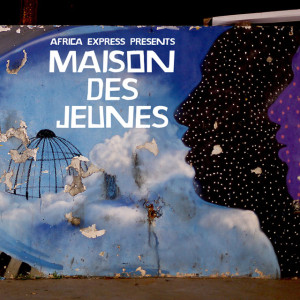 On Friday, the BFI is set to be taken over by Scanner, who will host a themed evening as part of the centre’s gothic season. As well as an interpretation of John Dowland‘s Lachrimae, Scanner will be joined by Gazelle Twin and Carter Tutti for live cinematic performances of specially made films by Chris Turner and Anna and Maria von Hausswolff. Death Waltz Records will be DJing.

We were really impressed by Younghusband‘s gig at the Lexington, calling the band’s first headline tour “a show full of promise”. See for yourself at Sonic Cathedral’s Christmas bash at The Social on Monday, which also features Bernard Butler‘s new project as special guests. It’s free, too. And on the same night across town at Oval Space, the many-legged Africa Express (pictured)’s long-awaited debut album Maison Des Jeunes is launched with DJ sets and special appearances.

BBC Sound of 2013 winners Haim wrap up a huge year – which saw them release their debut album, Days Are Gone back in September – with their biggest London shows to date, with two nights at the Forum on Monday and Tuesday.

In what’s becoming something of a tradition, punk popsters Los Campesinos! will be playing at Heaven on Monday, with support from Fortuna POP! darlings Joanna Gruesome. Other bands putting on their annual festive show include Slow Club, who are at Shepherd’s Bush Empire on Tuesday, and Emmy The Great and Tim Wheeler, who bring their Christmas album to KOKO on Friday.

Recent interviewee Marika Hackman brings her new EP to the Lexington on Wednesday.

St Vincent (pictured) releases a self-titled new album in February and will be touring in support of it, arriving at the Shepherd’s Bush Empire on 20 February.

Editors have announced a second date at the Roundhouse, on 19 March – the day after their almost sold out show.

Drive By Truckers are set to release a new album, English Oceans, on 3 March. They’ll be following it up with a handful of UK shows, including Brixton Academy, on 13 May.

Long-time collaborators Röyksopp and Robyn will tour together in 2014; dates are expected soon. And while we’re on about northern Europeans, Nina Persson has also announced a European tour which calls at the Scala on 5 March, promoting new album Animal Heart.

After Pixies were revealed as their Sunday headliners, the folk at Field Day have given us a sneak peak of their Saturday line-up… and it’s looking like their best ever. Taking to Victoria Park on 7 June will be Omar Souleyman, Warpaint, Sky Ferriera, Oneohtrix Point Never, The Temper Trap and James Holden, headlined by Metronomy.