musicOMH does The Great Escape 2013 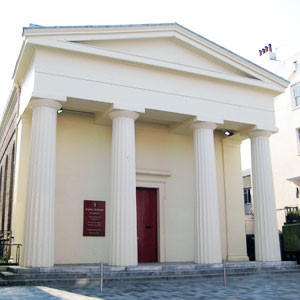 We’ve been hoofing round Brighton’s The Great Escape festival and convention every year since its inception (check out our podcast and review coverage from 2012’s event).

So we’re excited, happy and rather thrillfaced to have – for one night only, on 16 May – our own stage at the 2013 edition (RSVP on Facebook, why not). Rather astonishingly, this marks musicOMH’s first media partnership with a festival.

Our stage is the atmospheric and striking Unitarian Church (that’s it looking all smart in the picture), a central and intimate venue just a stone’s throw from the Pavilion and just about everything else.

Arrive early to check out opener and Barcelona-based one man band Coach Station Reunion, who cites Prefab Sprout‘s Paddy McAloon and Everything But The Girl‘s Ben Watt amongst his influences. He will be followed by Saint Raymond, aka Nottingham-born Callum Burrows, Kimberley Anne, who will in July play at the Rolling Stones’ Hyde Park gig, and Devonian singer-songwriter Ryan Keen. They all play ahead of headliner Lewis Watson, whose debut album is expected out through Warner later this year.

There’s of course plenty else to check out across the festival’s three nights too. Some of our favourite artists, not least Billy Bragg, will be heading up a programme that showcases emerging talent like few other festivals so successfully and consistently manage. Amongst the very many newbs firmly in our sights are Iggy Azalea, former Portico Quartet lynchpin Nick Mulvey, and Winnipeg indiepoppers Boats.

Check out the full line-up at the festival website, where you can also still buy tickets.

See you in Brighton for a fish supper?