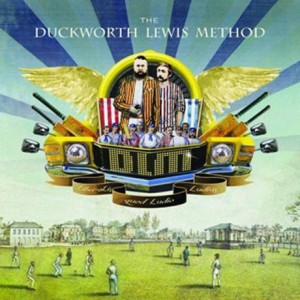 The world’s first cricket pop album is nearly upon us.  Oh yes. Cricket pop. The Divine Comedy‘s Neil Hannon (remember him?) and Thomas Walsh, a chap from a band called Pugwash, have indulged in a spot of side-project fun in expectation of summer needing a soundtrack. The result?  A concept album all about cricket.  (UPDATE: Here’s the review of the album.)

The project is called The Duckworth Lewis Method, named after a cricketing technique known only to the likes of Stephen Fry (and, we presume, Hannon and Walsh). Wikipedia tells us it is “a mathematical way to calculate the target score for the team batting second in a cricket match interrupted by weather or other circumstance”.  So there you are.

Tracks on the album, which is expected in time for the Ashes (tish-boom), include the contagious first serve The Age Of Revolution, Jiggery Pokery, The Nightwatchman, Meeting Mr Miandad and Test Match Special.  The first two of these can be heard on their MySpace.

“It is with a great sense of honour and humility that I come before you today to announce the forthcoming release of possibly the least necessary album of recent years,” jokes ‘Lewis’, otherwise Hannon with a cricket bat. “I give you a kaleidoscopic musical adventure through the beautiful and rather silly world of cricket.” Riiiiight.

As notorious apologists for Hannon’s music since last century, when we used to be a Divine Comedy fanzine (trufax), we’ve been aware of this album for months and have been waiting patiently for promotional material. There’s still no video or MP3 to give away, but at least there’s now a press shot. So we can wait no longer to ask the actually quite important question: Would you play cricket with these men?

In associated news, a new album from The Divine Comedy is expected in autumn 2009, Hannon’s first since parting company with Parlophone/EMI following 2006’s Victory For The Comic Muse.  Thrilling times.