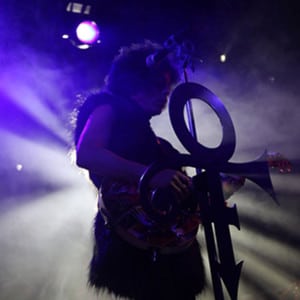 Tuesday 4 February 2014 was a surreal day for anyone keeping tabs on a particular Minneapolis-born music legend’s movements across London.

Having arrived in the capital from his New York launch party for debut 3rdeyegirl single PretzelBodyLogic, Prince and the band – guitarist Donna Grantis, bassist Ida Nielsen and drummer Hannah Ford Welton – gave a small press conference from a lounge in Leyton – Mercury-nominated singer-songwriter Lianne La Havas‘s lounge, to be precise. There they played acoustic renditions of two songs – the single, and FunkNRoll.

Earlier in the day they’d evaded TV news crews and an assorted rag-tag of journalists and music industry people, stirring up frantic tweets seeking their whereabouts from fans and media alike, before rocking up to Camden’s Electric Ballroom and starting a “spontaneous jam session” in their own time… at around midnight.

The “open soundcheck” lasted around an hour, and majored on new material from the upcoming  3rdeyegirl album PlectrumElectrum, but found space for a couple of surprises too, not least a cover of Wild Cherry‘s Play That Funky Music.

We were no more than 10 feet away from Prince in a venue initially well under capacity, but which began to fill towards the end of the set as fans queueing outside in the rain were at last let in too. Swapping readily from rock through funk, and wielding a bass at one point, His Purpleness was lit – in purple, of course – with his hair taking on the appearance of a halo.

The intimacy of the venue was a stark contrast to his 21-date 2007 O2 Arena residency; here, there wasn’t even so much as a barrier to keep him from his audience, though security staff roamed through and around. A clip of a rather kaleidoscopic Prince performing I Like It There at the Electric Ballroom can be viewed here:

At the show’s climax he announced that they’d be back in the same venue, and earlier, on the following evening.

There’s a ‘preview’ of PretzelBodyLogic here:

In the small hours, we left; surprised, amazed, and eager for much more. And more there will be; Prince has pledged to keep playing these Hit And Run shows until nobody wants to hear them any more. Judging on tonight’s performance, that will be in about 2029.