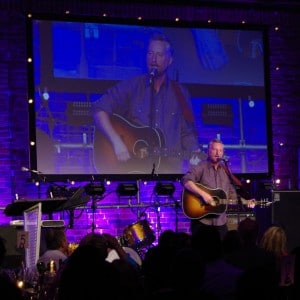 Amid a packed calendar of awards ceremonies, the Association of Independent Music (AIM) Awards stands out as something rather special. Now in its third year, 2013’s event took place at the City of London’s Brewery. Hosted by Steve Lamacq and Huw Stevens, it saw the great and good from the independent music world turn up to give each other a pat on the back and celebrate a bumper year for indie labels and the acts they turn out.

The night kicked off with a surprise award for a shocked and emotional Lamacq, who was honoured for clocking up 20 years in the biz. Presenting him with the award, Richard Hawley recalled meals out with Lamo – a packet of pork scratchings and two pints of cider – while the likes of Frank Turner and Domino Records’ Laurence Bell left video tributes to him.

Later in the night there were similar recognitions for Rough Trade founder Geoff Travis, who took home the Pioneer award. He got the biggest applause – and standing ovation – of the night, as he talked about the highs and lows of almost 40 years in the industry, and named The Sweetest Girl by Scritti Polliti as one of his favourite ever Rough Trade releases – with Green Gartside in the room. Glastonbury organiser Michael Eavis made an appearance to present Billy Bragg with the outstanding contribution award. In typical Bragg style, the self-styled ‘Sherpa of Heartbreak’ took the opportunity to make a few thinly veiled attacks on the corporate nature of the industry today, saying “I’m not in the music industry… I make my money by playing gigs,” before rounding up the evening with a trio of songs, ending “where it all began” with A New England.

Cementing what a big deal these awards are for those involved, Franz Ferdinand turned up to play tracks from their new album, Right Thoughts, Right Words, Right Action. The xx‘s Romy Madley Croft told us, after picking up the award for ‘best difficult second album’: “It’s a great night, but quite scary because it’s not as though you’re stood up in front of your fans; it’s full of your peers and you don’t know what they think of your music.

“It’s great to be celebrating independent music. We definitely wouldn’t be where we are if we weren’t on an independent label. It’s the only way we were going to get the time to work out what we wanted to do and where to go as a band before being rushed onto the second album. Independent labels are all we know, and we hope that’ll never change.”

Special catalogue release of the year: Various – Scared To Get Happy, A Story Of Indiepop 1980-99 (Cherry Red)

Hardest working band or artist: Frankie And The Heartstrings (Wichita)

Golden welly for best independent festival: In The Woods

Independent breakthrough of the year: Macklemore and Ryan Lewis (Macklemore)

Independent video of the year: Django Django – WOR (Because)

Independent album of the year: Daughter – If You Leave (4AD)

Independent label of the year: Warp