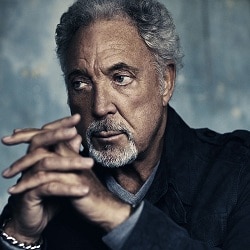 Tom Jones turned 70 years of age today (7th June) but, as we witnessed in the atmospheric surroundings of One Mayfair last week, he’s far from gracefully retiring with a pipe and slippers. The Welsh warbler showcased his upcoming new album Praise & Blame, and was on fine form.

John Murphy reviews the album here, while Ben Hogwood fills us in on the showcase event…

It is some achievement to be an artist for as long as Tom Jones and to still find a new direction to pull out of the locker. Yet even by his standards this is quite an about turn for the Welsh crooner, and crucially it feels like it involves music very close to his heart.

The change will inevitably open up comparisons with Johnny Cash and his vocal epiphany, and also draws parallels with the career direction taken by another vocal heavyweight, Robert Plant.

Yet as Jones performed his new record in its entirety for the first time in One Mayfair its rawness was immediately evident. The newness was emphasised by the occasional memory slip from the singer, but otherwise he was the consummate showman, with near-faultless vocals.

More importantly, they were shot through with almost dangerous levels of emotion, unravelling over the ominously slow tread of a marching bass drum. Bob Dylan‘s What Good Am I explored a rare vulnerability in Jones’ make-up, while in John Lee Hooker‘s Burning Hell he bellowed forth as if singing for his life, rattling the venue’s very foundations.

“We’re going to sing something a little more emotional,” he told the rattled crowd, sporting that big bear smile. For all the world he looked like a cross between a stage star and a near relative of Ernest Hemingway – a parallel not lost throughout this musical exploration.

As the rest of the album unfolded it was clear we were at the very least witnessing something unusual – and at times, something pretty special. In releasing a covers album to mark his 70th birthday, Tom Jones may well have shown us the most vivid glimpse of his soul to date.